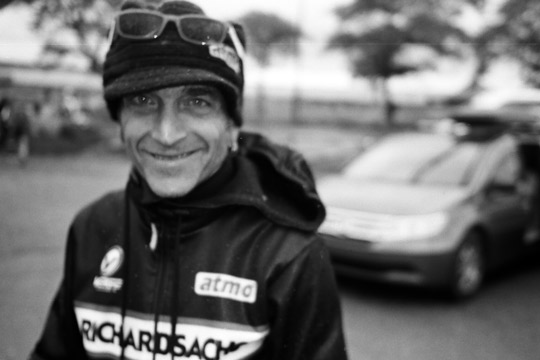 The name Richard Sachs has always had a familiar ring for me. I can’t explain the whys and wherefores, it’s a name written in stone in my mind, the name of a cycling legend.

Imagine building frames, year after year, for 40 years. I know companies that do it, or rather that get others to do it. But this is one man who has stood for his brand, his name, for all this time. Richard Sachs tells his story in his inimitably laid-back style, talking about all his life’s great achievements without the slightest quiver of emotion in his voice, as if nothing could have been simpler. But, such is the legend of Richard Sachs that, for us, the simple act of meeting him felt like a great achievement in itself!

After some negotiation I managed to entice Richard away from his stand at the NAHBS, just taking the time to let the lady who runs the shop know and to sit down at a table. His slight build seems out of place with the strapping upper arms you’d expect to see in a welding workshop. His eyes are bright and piercing and when he tells me he’s competing in the 60-65 age group this year, I realise he’s probably in better shape than I am, after a season of cyclocross…

JK: I know the Richard Sachs brand, but I have no idea how it all started. Can you tell me more?
RS: At the time there was no plan in my head. I didn’t have the slightest intention of building bikes. I was a racing cyclist and I was working, but I also had a passionate interest in the equipment. This shop was called Witcomb Lightweight Cycles, it was the little brother of another shop in the UK of the same name. I went to work in the shop in England for. Over there, I learned how to build frames. When I came back to the USA in the summer of 1975, I went back to doing the same thing, building frames for the shop. But I started to realise that I didn’t want to work for anyone else. I resigned and set up on my own. I wanted to be my own boss.

JK: Who were your clients, when you set up on your own?
RS: I was living in Connecticut, near where I still live now. When I left the shop I was also a racing cyclist, and I was part of a community of cyclists down there. People knew I’d spent several years in Europe. At that time, all the bike racers who came to buy a bike had one custom made. People knew me, as did the bike racers, as I was competing a lot, winter and summer. It happened naturally.

JK: Did you have enough clients when you set up your own business?
RS: I sold a lot of bikes. And more importantly, I worked a lot, for several years I only built 120 frames per year. I sold frames and I sold whole bikes, which meant I also had to take care of the assembly. As time went on, other frame builders started to come see me, to buy parts, gears and brackets, or frame kits ready for welding. I also started making parts for other people. Always in steel.

JK: What inspires the design of your frames? Have they evolved over 30 years?
RS: I’ve always wanted to work on my own. I designed the frame as best I could from my point of view as a racer; I tested it and developed it until I was satisfied. As the years go by, obviously, you make improvements. As you manufacture, you get more effective, more accurate. And this is how my work has developed. You get better at it with practice. But I don’t want to work that hard any more. Now, I make an average of 5-6 frames per month, plus a few parts for other people…

JK: The reason I ask that is because I’ve been told that your frames have always been painted white and red, and always the same. What’s the story behind this choice of colour?
RS: In 1982, I formed a road cycling team on the East Coast. One of our sponsors was le Coq Sportif. You should know them, they’re French… They made all our kit. The team took my name, because they were cycling my bikes. We matched the colour of the red and white jerseys to the frames. The sponsor left… but we kept the colour. And the same shirts, although now it’s Verge in New Jersey that manufactures them.

JK: But I’ve seen a new red and a new, more silvery white?
RS: Ah no. It’s the same colour. To get particular a colour, you have to calculate the number of coats and the drying time. It depends on the method you use to apply the paint too. The colours are the same, just with a different silvered varnish. But they’re the same colours.

JK: You have been a racing cyclist. Can you tell me a bit more, and about your team too?
RS: All the team shirts, for 30 years, are on the stand. In total, there have been 10 national champions in the history of the team.

The United States champion shirt on the stand is Jonathan Page’s from 2002. He has just won back a new top-rank competition, 10 years later, but now he races in Belgium.

I race too. I’ve always raced, all different types of race, during all seasons, I’ve always raced every race that I can, cyclocross and road cycling. Now I’m going into the 60-65 age group.

The day after the show Richard Sachs was awarded a very good bottle of whisky for being one of the founding members of the NAHBS organization. An occasion that I noticed gave rise to one of his rare smiles. 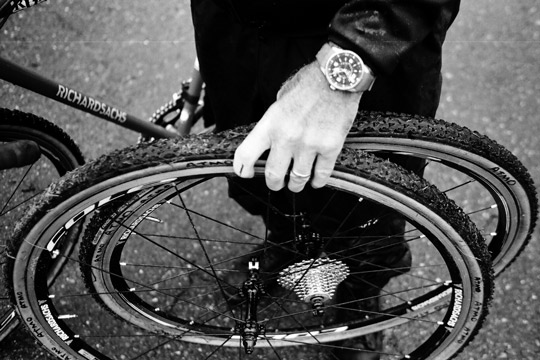 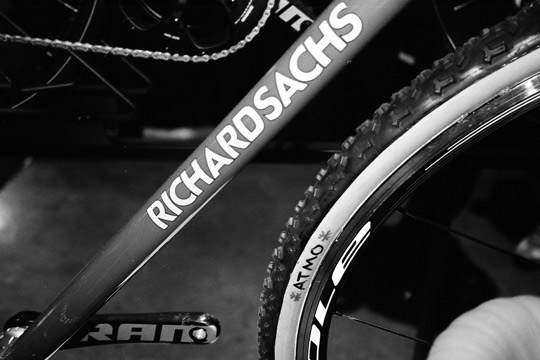 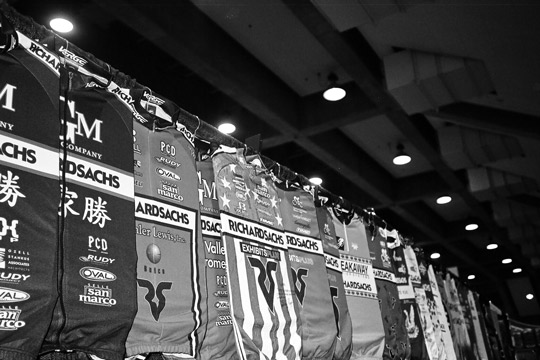 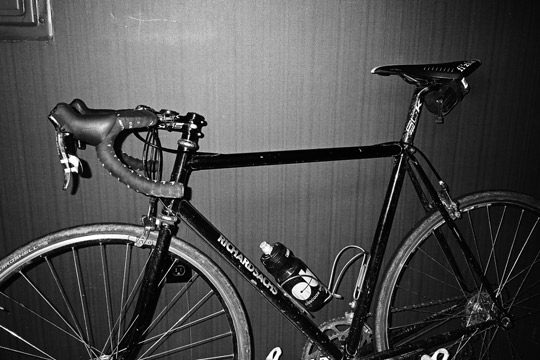 Originally posted by Julie Krasniak in Rapha Continental on 18 April 2013.