You Must Be Able To Sell, Too

In light of so many of the conversations I have been in lately, and those going back to the beginning of my Internet days, it’s kismet that I should find these words staring right back at me.

…you must be able to sell, too.

I collect information, articles, anecdotes, and even parts of these if just a small part of the whole makes my radar. I can’t remember a time when I didn’t tear apart newsprint, magazines, and catalogs just to save something that spoke to me. I also save things that support a point of view I might have, even if it changes over time. If I have one story I have 5,000 of them. The collected works can be considered my personal support system. I never tire of reading about things that, and people who, make me more comfortable in my own skin. It may not be human nature, but it’s my nature.

A few weeks ago I was photographing one of the archived clippings and added it to my ATMOments page. I remember the article as if it was yesterday that I plucked it from the New York Times. But the publication date was 1990. The story was about Japanese pottery and it focused on the Tatebayashi kiln in Arita. What drew me to the page was the photograph of the master, rather than the words. I tore it out, looked at it, and wondered about the overlaps between what they do there and what we (I…) do here. Bicycle making doesn’t have a very long history or strong tradition. Those of us who go to the bench each morning don’t have many men we can cite as masters who came before us. The storyline of the article was added to my many decades-old compilation of similar clippings in the hope that I could use it to find meaning in what I do.

When I first saw the black and white image of Gen-emon Tatebayashi, my impression was that here was a man who entered his trade as a child, performed all the basic and mindless and repetitive tasks asked of him by the more experienced laborers on the shop floor, and then spent a lifetime finding ways to combine his intuition, ambition, and skills in order to lead the workforce and become its master. And when I read the story I realized that I was not far off with my impression.

There was something about this man’s face that suggested comfort, knowledge, and also a connection to all that came before him. In the pecking order that exists in his chosen vocation, he made it to the proverbial other side. Now he was leading, and adding to the kiln’s long history, its creative processes, and its success in the marketplace. Pottery and bicycles may have nothing in common. But in 1990 when I first looked at this man’s face and read his story, I had one of those “I’ll have what she’s having” moments.

When I published the ATMOments page on April 13th, a potter from Texas asked about the original article. I hadn’t read it since it was printed some 23 years ago. The text in its entirety is cached here: Arita Journal; At Hallowed Pottery, the Master’s Wheel Is Stilled . The last few words in the article spoke to me.

What No One Else Dared

Gen-emon Tateybayashi gained fame because he was bold enough to try what no one else dared. He created new designs, many of them radical departures from Arita’s staid patterns, said Sakae Maeda, executive director of the Arita Ceramics Industry Association.

He shipped Gen-emon’s wares to Tiffany’s, long before Japan owned a piece of the store. Later, he decided to apply his newer designs to every kind of household goods – towels and umbrellas, scarves and jewelry, even futons, the beds that most Japanese roll out on their tatami mats. The competition was horrified at first. ”Now everyone else is following suit,” Mr. Maeda said.

But the meaning of the Gen-emon revolution, everyone admits with a sigh, is that the kiln’s leader must not only have a good brush, he must have a good sales pitch.

”If I was asked whether I wanted to make things or sell things, there is no question – I would just make things,” said Mr. Kaneko, who says he is waking up in the middle of the night these days with new pottery designs floating in his head. ”But in Japan today, you must be able to sell, too.” 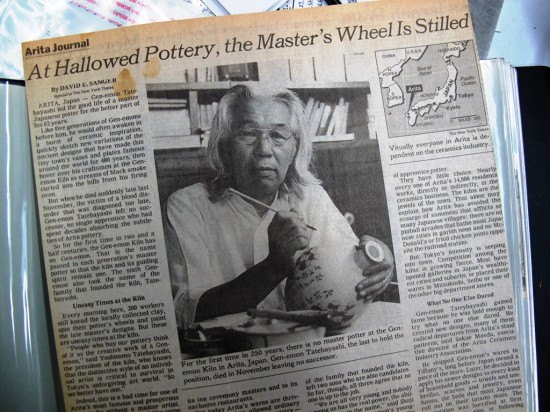