I started drawing bicycles with my name on them in 1969 as a diversion to the life I led as a Peddle School student. My first real bicycle was an Atala. A year later I had a Frejus. The models and components don’t matter. I was hooked. Not hooked as in I wanted to enter industry; that never occurred to me. I was a student. My role was to matriculate and leave one campus for another. Things don’t always line up so that roles can be filled.

By the time I left school I was taking Bicycling (still a Leete Publication based in San Francisco). Australian Cyclist, a magazine that often arrived four months after its cover date. And International Cycle Sport from the UK. Despite my inclinations to pursue a writer’s life, I was intrigued by nice bicycles. More importantly, the sport got deep into my veins. That people used such elegant machines to race on made me so wet and sticky that no amount of paper towels could clean up the mess.

When I found myself needing to place my name on a bicycle, there was one standard: it had to be in yellow with a black borderline. That’s how real men decorated. And real men according to my opinion were the fellows in Italy whose names appeared on the frames of every hero (of mine). Sure, I followed the work of those based in England. I knew everything there was to know about French bicycles. And Dutch. Belgian. And bicycles from Denmark and Sweden too. But my own would be made in the mode of those Italians who ruled the roost.

The seraph outline was chosen from a book a pal loaned me. It served me well from the early 1970s to almost the end of the century. Honestly, once it was on my down tubes, I hated it. But I looked the other way for the first two decades. The letters were yellow, and had that borderline. Little else really mattered. 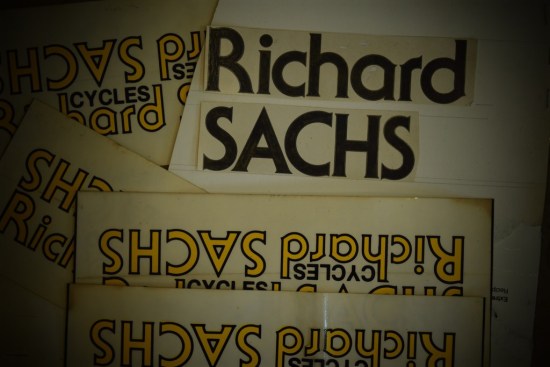