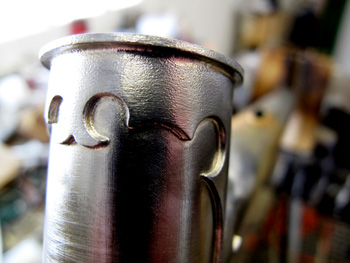 the title, you may be cheered to note, has little or nothing to do with what follows; the polka dots bit could conceivably be a touch misleading, given their importance to anthony charteau and thus to colnago, or perhaps, at a stretch, even to a robert millar inference. but in fact, neither have any real connection to my title. it just so happens that it’s the name of the jeff hamilton trio track i was listening to (track six from the symbiosis album) when an interesting e-mail made its way to my inbox.

we’re only about one week away from the north american handbuilt shows (nahbs), taking place this year in larry’s home town of austin texas. it’s an exhibition of bicycles and related ephemera that has grown from, dare i say it, a small idiosyncracy originating in houston, texas in january 2005, to a gathering that seems destined to tackle interbike as the premier showcase for american bicycle talent. of course, the american bit has become somewhat diluted over the years, changing the inference from ‘north american handbuilt’ to more accurately, a handbuilt show that takes place in north america. twenty three exhibitors took part in that first show, and seven hundred folks turned up to say hello to them all. 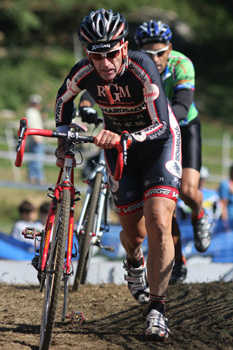 this year there are approximately 160 exhibitors, not all of them make bikes, and not all of those that do, make them entirely by hand. that, however, is pretty much by the by, since the whole affair has become a major bicycle social occasion, one that i am determined to join in one of these years, since i see a number of friends amongst the exhibitor list, and it would be nice to go meet them all in the one place.

however, none of this gets me any closer to the subject in hand, and even though i possess a master’s degree in digression, i should really get to the point. out of the seven years (including 2011) that nahbs has been in existence, only six have exhibited at every show, one of whom is incredibly well known to thewashingmachinepost. in fact, on previous occaasions, i have described this man as the best friend i’ve never met…

if any of you regularly look at richard’s flickr pages, you will already be aware that there is an entire series of photos depicting how to build a bicycle frame, or more precisely, how to build a richard sachs bicycle frame. would that it were that simple, but richard is almost as deft with a digital camera as he is with the brazing torch, and details closely, many of the aspects of frame-life, including the filing of lugs, dropouts and fork ends in a comprehensive series of photographs. 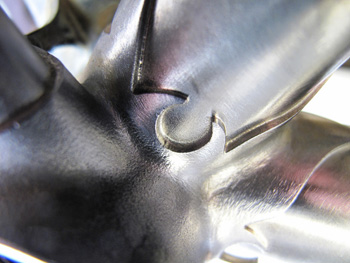 as if this were not enough for a one man show, he was also one of the prime movers behind the framebuilder’s collective, an amalgamation of those prominent in the industry who wished to see it move forward with integrity and skill, and a responsibility towards what us mere mortals would regard as art. the collective went public at nahbs five in 2009; “my personal muse for the framebuilders’ collective, to no one’s surprise, included the AHCI (academie horlogere des createurs independants), a select watchmakers’ group that has taken decades to form into a cohesive organization and still (only) has a few dozen members.”

but now richard sachs will become the first member emeritus only two years after bringing the organisation to the public eye, leaving his fellow founding members (nicholas crumpton, david kirk, darrell llewellyn mcculloch, dario pegoretti, carl strong and sacha white) to continue the story. “the early years of skull sessions required energy, strong opinions, and decision making capability. my goal was to help the group realize itself. that is done. i consider my day to day involvement over.”

for a custom framebuilding business with a reputed seven to nine year waiting list, and an indefatigable need to race cyclocross every season, i doubt many of us would argue with a perceived need to rein back just a tad. he wil continue to fulfil some of his board of director duties, but “other than these, i’ll consider myself the first member emeritus of the group. 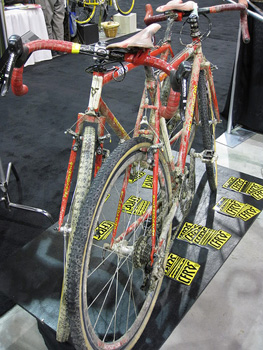 “i am proud of my involvement and the work i put into the collective’s early years. the current member list is comprised of framebuilders whose drive and dedication ensure that the organization continues as a valuable tool for the framebuilding trade and all who are interested in it. with this accomplished, it is time for me to devote time and energy to other projects.Ó

if you’re attending nahbs next week, make sure you drop by the sachs booth, shake the man by the hand, and buy him a san pellegrino. just not the flavoured stuff, mind.

‘needing some air, he went into the garden’