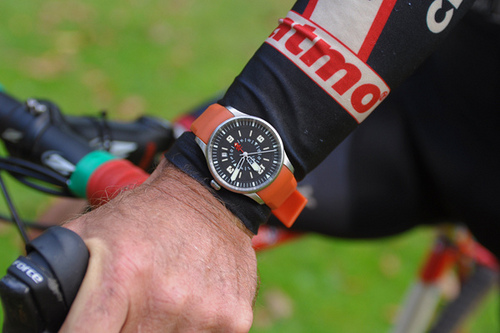 It was the day before the Providence Cyclocross Festival and Richard Sachs asked whether I was going. Richard Sachs is a bicycle framebuilder in central Massachusetts, maybe you’ve heard of him. He builds these nice lugged steel bikes for which there is a 10 year wait list. He also races cyclocross, with his team, on bikes that he makes (no wait list for those). They would all be racing in Providence that weekend, and if I went I would get to see them. 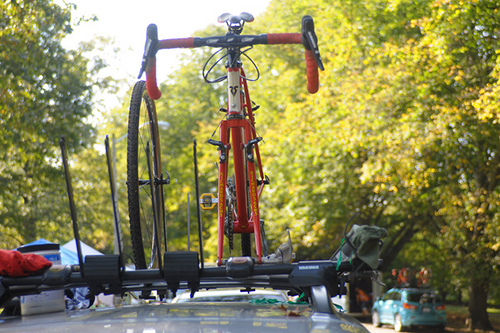 I should explain that I’d never actually met Richard Sachs at this point, though we’d exchanged a couple of emails. As another bit of indirect contact, some time ago I briefly rode one of his bikes – a blue and white 26″ wheel brevet bike that belonged to a friend of the Blayleys. It was a nice bicycle, and I knew of the legendary status of Sachs frames. But what truly sparked my interest in the builder was his writing. His writing is extensive, addictive, and freely available online. Blog entries that read like essays on postmodernism. Quotes from his own interviews followed by commentary, analysis and critique of those quotes. He keeps records of things that happened 10, 20, 30 plus years ago. He tells and retells his history, using scanned photographs, scraps of receipts, and yellowed bits of newspaper as evidence. You can learn almost anything you care to know about Richard Sachs by reading through all of this. “[People] are buying me, not the bike,” Sachs once wrote. “They want to have a little bit of me.” And so he grants us access to his person, or at least gives the illusion of doing so. Naturally, all of this fascinates me. 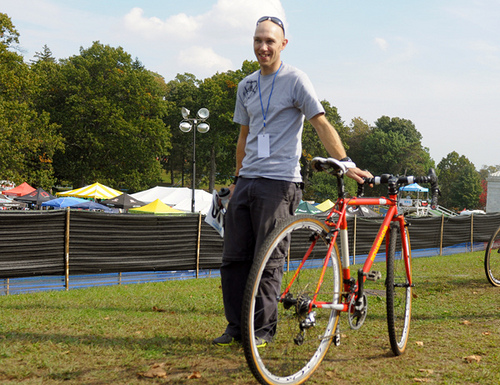 The site of the Providence Cyclocross Festival was labyrinthine and chaotic. When I got there, I realized that I had no idea how to go about finding a specific person. There was no Sachs tent, and he had given me no instructions for where to find him. As I wandered around, I made a game out of looking for him. After 10 minutes the closest I got was spotting a red and white bike being wheeled past, with “Richard Sachs” on the downtube in yellow. 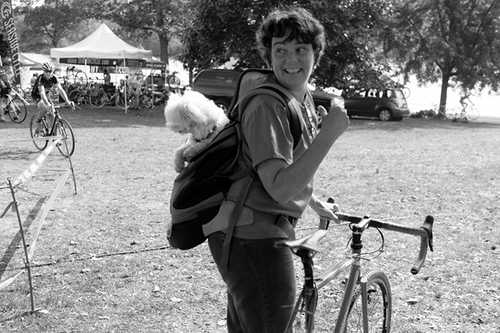 Then I saw a woman with a fluffy white dog peeking out of her backpack. Both she and the small creature looked familiar. When I noticed that she too was rolling a red and white bicycle, I realised this was Deb, Richard Sachs’ wife. The Masters men’s race was scheduled to start soon, and she was headed to the staging area. 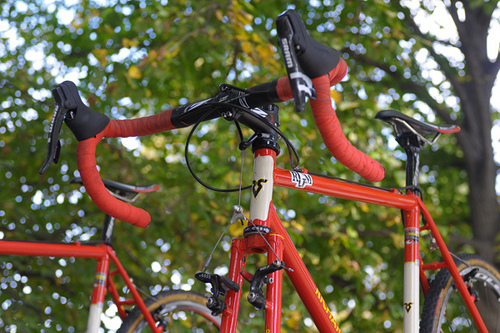 All of the Richard Sachs cross team bikes are red and white, and all are fitted with identical components. The look of the team bikes has not changed much over the years, nor have his bicycles in general. “Why buy a frame from a one-man shop still using traditional hand-building methods?” his website asks. “Because technology alone is a poor substitute for experience.” The experience he speaks of dates back to 1972. His frames are not custom, but made to measure, in the sense that the customer has no input into geometry or other core design elements. A Sachs frame means Sachs geometry, his own proprietary blend of (Columbus “PegoRichie”) steel tubing, his own lugs, dropouts, fork crown. He has perfected his method over the course of 40 years. This is what the Richard Sachs customer pays for; this is what they believe is worth the wait. Spotting some more of his bicycles on the roofs of cars, I try to see all of this in the frames. But my novice eye just sees some classic lugged bikes. 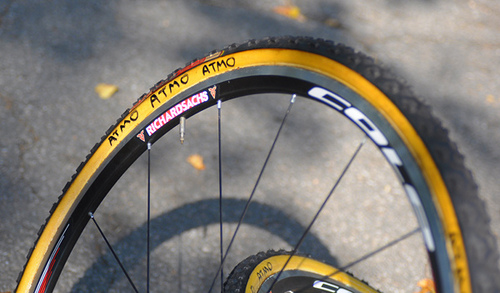 I was now in front of a car that I recognised as his. “Richard Sachs” was everywhere, but still no Richard Sachs. Also everywhere was his signature acronym ATMO – “according to my opinion.” ATMO is used on online forums, in written correspondences, in descriptions of things. Products are branded with it. You can buy an ATMO bag, t-shirt, hat. 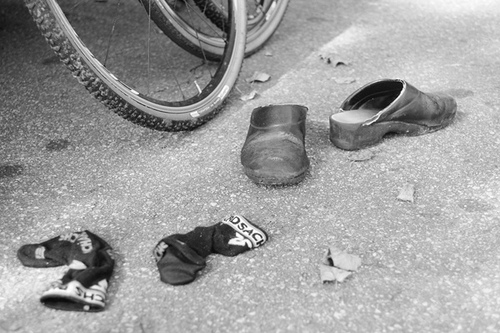 Socks. Seeing them somehow made me feel better prepared to meet him. Just one of those ridiculous thoughts that goes through one’s mind. In fact I had no idea whether I’d be able to pick him out of a crowd. I flipped through my mind’s database of all the online pictures I had seen of him. These generally fell into three categories: There was the thoughtful Richard Sachs in a black turtleneck sweater, brazing. The muddy, suffering Richard Sachs in a skinsuit and helmet, racing. The smiling Richard Sachs in jeans and a blazer, shaking hands at NAHBS. Tableaux. 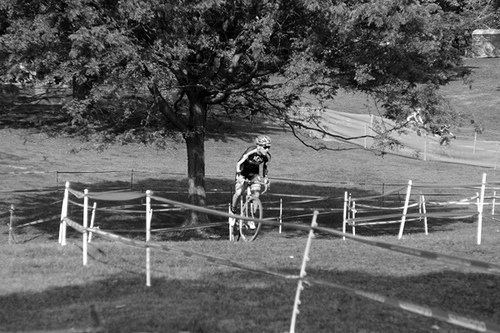 I’d heard numerous stories at this point about what he is “really like.” He is arrogant. He is humble. He is funny. He is humorless. He is charming. He is abrupt. But now I spotted him in the race, and my first impression was that he was a cyclist. Skinny and scowling, he stood and pedaled, staring straight ahead, breathing with his mouth open, as if gasping for air. “That bike fits him well,” I thought, before I remembered that he made it. 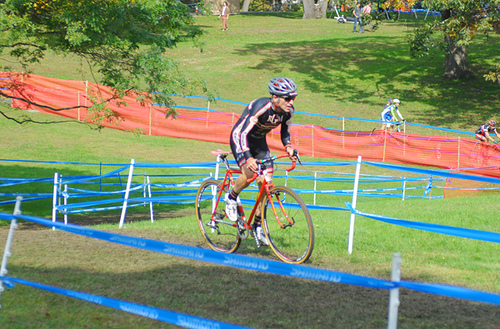 I had picked the wrong day to attend the cyclocross race: sunny, dry, cheerful. The following day would be all rain and mud, but my pictures make the riding look like a fun little jaunt. There were at least two men in the Master’s race wearing the RGM Watches-Richard Sachs team kits, but I quickly determined that Sachs was the one in long sleeves and that made it easier to follow him around the course. Not that this helped me much. 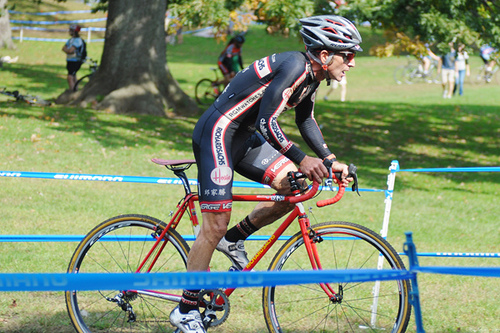 I do not envy sports photographers: This stuff is more difficult than a wedding. To get good shots, first you have to study the course in advance and wait for the riders you want to capture in the spots that not only promise action, but offer a good vantage point for photographing individual riders. Then you have a split second to compose a shot; once a rider passes you, there is no do-over. By the the end of the day I started to figure it all out, but when Richard Sachs was racing in the morning I had not yet gotten my bearings. It took a couple of laps before I even managed to get a picture where his head was not overlapping with a tree or other riders. Finally he was riding alone for a stretch and I got a few shots, one or two of which were even in focus. Still, nothing to write home about and certainly not worth all the running around I did. 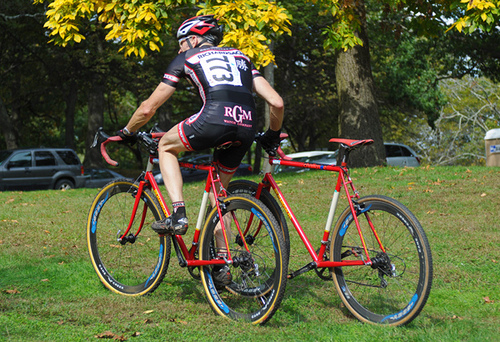 Once it was over, I headed back toward the car where I had seen the ATMO wheels and dirty socks. On my way there I saw the other, short-sleeved Masters rider (David Genest?) rolling along while doing the double-bike maneuver. 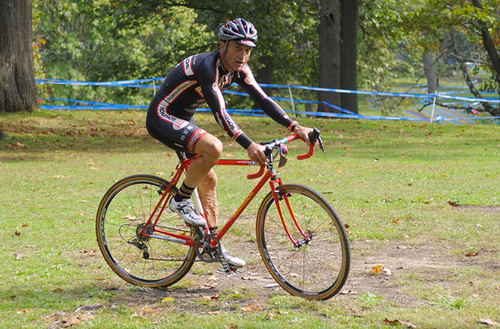 Soon after that Richard Sachs rolled up, recognizing me. His appearance up close was a little startling at first. He has very pale gray eyes and features that are both angular and delicate. The kind of face you might see in an expressionist painting. We said hello. He was tired, but willing to pose for pictures, even pointing out which parts of the bike and his outfit to photograph, so that sponsors would receive attention. 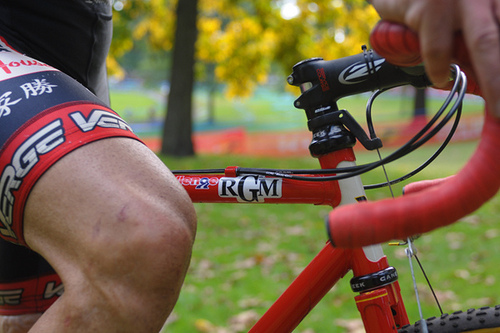 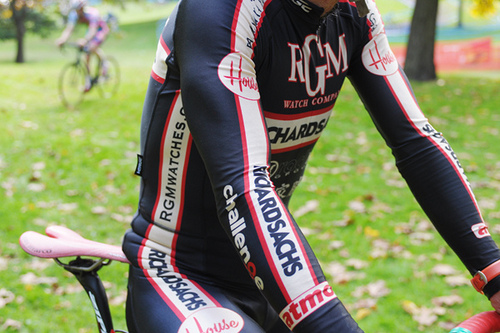 The black team kits with cream horizontal panels and red edging are striking and elegantly styled. Sponsors’ logos have the look of vintage newspaper headers. 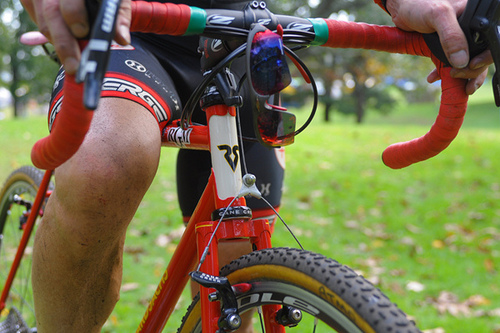 I studied the bicycle – a Richard Sachs, with Richard Sachs upon it. I tried to focus on the details of the frame, take some close-up of the brake bridge and fork crown, that sort of thing. But instead I kept thinking of the steel tubes against the 59-year-old muscles. The streaks of dirt on the frame juxtaposed with those on his legs. The stylized RS headbadge with the weight of the actual man whom those initials represent resting above it. Richard Sachs has done an impressive job of branding himself. He has created a micro-universe of imagery, logos, words, phrases, even ideas that signify him. The red bikes. RS. RICHARDSACHS. e-RICHIE. ATMO. CFRA. “The frame is the frame.” “Imperfection is perfection.” I tried to see through these layers of signifiers and representations, to the actual flesh and bone person in front of me. But I couldn’t see him clearly. Or photograph him in a way that satisfied me. 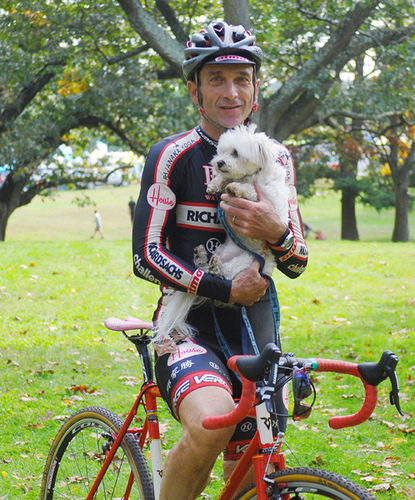 We kept talking, not about anything in particular. He came across as open, friendly. At some point he picked up his fluffy white dog, cuddled it, held it in front of the camera. I took the pictures, but even as I did I sensed that this too was a tableau; that when I’d get home and look online, others will have taken the same shot. 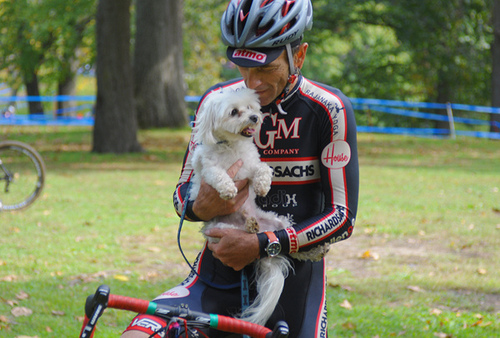 “Perhaps I am not I even if my little dog knows me,” I thought. That’s a lesser known version of a popular Gertrude Stein quote. I could not get a feel for the man, as a separate entity from the e-mythology that surrounds him. At the end, finally I came close – catching him off guard as he sat on the edge of his car and stared into space. It was a fleeting moment, and still perhaps a tableau. The post-race Sachs. 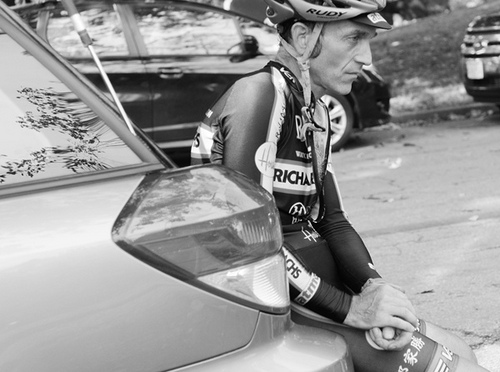 Before becoming a framebuilder, Richard Sachs had planned to be a writer. Of course, this was over 40 years ago, but it still “explains things,” one could say – meaning his blog, his extensive documentation of personal history, the way he forms his replies in interviews. And the interviews with him are numerous, as are the biographical articles and the reviews of his bikes. Me, I can hardly contribute anything of substance to such a collection. Best I can do is share this story of meeting him.

The preceding article was originally posted on The Lovely Bicycle on  Friday 26 October 2012.