As a direct result of a JRA I had in Matera while on a bicycle tour across Italy in 2003, and my being completely disenchanted with the material available to my trade for at least the previous decade and then some, as well as several intimate phone conversations I had with Dario Pegoretti about the state of the state of the state of things, the two of us decided that something had to be done to ensure a future for tradesmen like us. We had been living on vapors given off by suppliers who hadn’t innovated in a very long time. If and when they did bring something new to the table, it was invariably for large scale manufacturers, many of whom were transitioning into robotics, or Tig welding, or sourcing frames from Robotics Inc. a firm that specialized in Tig welding. For the rank and file brazer, especially those for whom lugs were the joining technique of choice, and most especially for the four or five of us who were active prior to the Y2K niche renaissance (sic) yet somehow made it to the “other side”, there was nothing. And nothing didn’t cut it with me atmo. We approached the staff at Columbus Tubi with the concept of starting from scratch to create a modern, 21st century, no-holds-barred, bust-out retail plus 10% level set of OverSize (OS) pipes for the card carrying members of the Farm to Table, Ingredient-Driven, craft brewed framebuilding movement. By the end of 2004 our collaboration resulted in the first set of tubes made expressly for those who 1) braze and, 2) use lugs. Called PegoRichie (the project’s working title was Spirit For Lugs) the set has evolved over the 12+ years since its birth. It’s available in several lengths and weights as well as the game changing ÜberOverSize (ÜOS) dimensions that allow (gulp) framebuilders to use a CF fork if desired. Something for all of us, once again – as it should be. Cool pipes. A cool seat tube decal. What else could you possibly want? Produce shit or die.
. 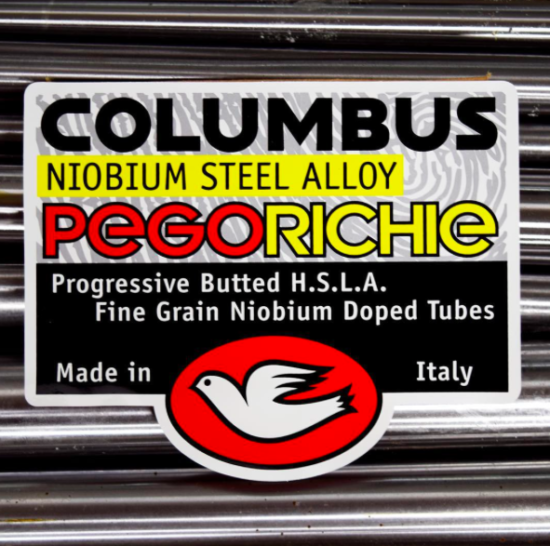