Rene Singer is not a real person atmo. But this set of lugs is tres real. In January 2007, with the tag line, “Get In Touch With Your Inner Constructeur“, another dish was added to the RS materials menu. These bad boys were my fourth set and also an attempt to cast the net out a bit. The idea came soon after the Nuovo Richies were delivered. I looked at them and realized that if I rearrange the head tube shorelines, cut off the beaks, and fill the windows, I could morph one set into another style suitably enough for the foundry to “get” my next direction. Look closely and the windows show on the far side of each lug. But it was the near sides of these samples that were used as the template for what would eventually be drawn and produced. These parts simply ooze all things de Gaulle, Coco, and macaroons from Laduree. The Rene Singer lug set, especially the stainless steel version, became popular very fast. People just loooooove the shiny stuff. It’s often noted that options lead to insanity. With my lug set offerings numbering four by 2007, I was ready to drive people crazy. And the graphic? That’s gold, Jerry. Gold! Produce shit or die.
. 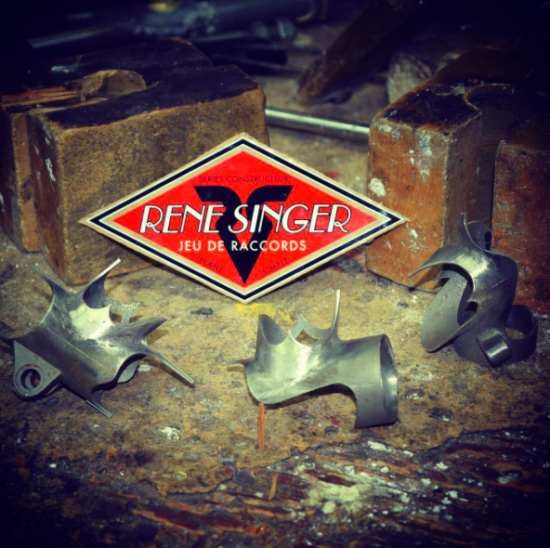 « Something From Nothing
The Highest Level Of Design »