There won’t be any B samples, or suspensions, and I won’t wait eight years before I tell my story.

It’s taken half the cyclocross season, but I was finally busted this past weekend. For all the training, race prep, daily visualization sessions, expectations, the endless hours atop the Lemond Revolution, the encouragement from my inner circle, as well as with all the technical advantages I have being able to make two identical, perfectly balanced bicycles that fit me and no one else – after all of this, I’m positive. Ban me for sentences that have too many words, but not for being positive.

I take racing very seriously, and have pinned on numbers all of my adult life so far. I’ve never done it for fun – I get that it is fun – but I never would spend all the time and energy if it didn’t fill some competitive drive I have. Well, as a 55+ Master who’s in his sixth year with this age group, I finally accept my fate. It will take more than a miracle for me to see the front of the field.

In the past, if I had a bad day or a low finish, I’d hang on to it until the next start. As hard as I’d try to mask it, being around me when things went poorly during my 58 odd minutes in the pain cave was no fun. I mean, what’s the point of lining up if I can’t turn my head on the second lap and see dozens of cats suffering behind me? That was then. But this is now…

This fall I’ve felt like a pinball in an arcade machine. Not because I’m bouncing off obstacles or fellow competitors. It’s that I can’t make snap decisions about lines on the course, or which wheel to follow, or even when to parse out an effort. I know how to race; I just don’t know how to race right now.

On the second lap this Sunday, as another small group was forming without me, it was a familiar sign. In a prior season, I would have found a way. I’ve had many chances, and made the most of them. In 2013, it’s someone else’s turn. And that I can feel this way and live with it is a positive.

All races are tests of something – the tactical, the physical, the machine. Since that first Saturday up in Williston this past September, I have been tested too, and I am comfortable with the results. 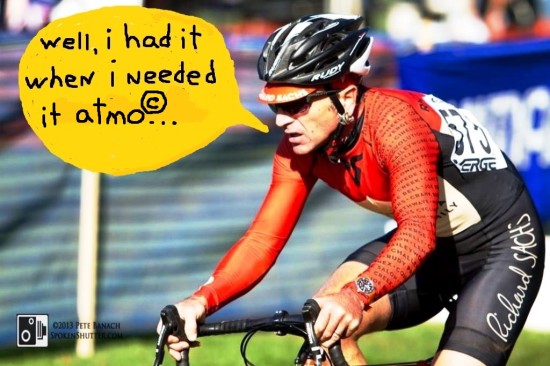