The Bicycle, The Sport, And Me

Do you see the picture pasted in below? It’s the oldest decent image I have of myself racing. It’s from about 1973. I rode for CYBC, the very same club I still race with and have sponsored for some 30 years. And I am on my beloved W.B. Hurlow, the second of three frames Bill would make for me. There are other, older pictures, but none large enough to scan or even impress with. I make bicycles only because of a direct line traced back to my entrance in the sport. I was pinning on numbers before I ever set foot in a frame shop. And despite all the stories about a writing career gone astray and college admission dates affording me a prolonged summer vacation that continues to this very day – and even the one about my ending up in England because I wanted to get even with folks who refused me a bicycle mechanics job I answered a classified for – before all this, I was smitten by bicycle racing. By extension, the bicycle itself drew me in because, as a tool used by the hard men whose names and stories graced the racing publications I was reading, I believed it was as much an object of beauty as the sport itself.

So I went abroad, learned as much as I could about this trade, came home, and became a practitioner. Some four decades have passed, and the one constant in my life (so far…) is that I race bicycles. I am of the sport, I manage and sponsor teams, and the framebuilding I do is a way to take up time between race weekends. Wait, that last bit sounds a little script-written. Let me be specific: I am a bicycle racer who makes frames, not a framebuilder who races. And all these years, the sport has driven me, taken me places, has been my muse and mistress, and has also confounded me to no end on the worst of the bad days.

Our industry is inextricably (I love that word, inextricably…) connected to the sport. Wins sell. Domination sells. Consistent results sell. I can think of few components whose market acceptance is not tied to high-performance, some how, some way. Racing is the highest of high-performance. I am hard pressed to name a bicycle, or any derailleur, wheel set, pair of shoes, or helmet that doesn’t have some synergy with a race result, a team, or a marketable sports figure. I can’t imagine what the landscape would look like were it not for the arena of competition. Without racing, then what?

The most successful brands are aligned with the sport. Folks in this trade who know and understand the connection between the product, the sport, and its history are the ones who survive the longest. According to my opinion, those industry men and framebuilders who are of the sport are the ones whose intuition is best trusted on issues of design, anatomy, fit, geometry, and all the concerns a client might have about a bicycle. My story is no different. Say what you will about craftsmanship, the best steel tubing, the attention to detail, or even the passion and blood that’s spilled for the art (sic).  For me, the longevity and success is a result of one single thing: I am a bicycle racer who makes frames, not a framebuilder who races.

In this message board, Internet-driven, download an app and become an expert era we live in, framebuilding is hot. It’s less hot than it was just a few short years ago, but it’s still hot. Everyone wants to create. Many folks want to sculpt, throw clay, or make jewelry, but somehow find an open window and crawl into the niche. When I try to separate the players from the scorecard, my radar focuses on the effbuilder and his ties to the sport. Does he compete? Has he ever? Does he even look like he rides or can roll out and do some intervals? Is there a team aligned with his brand. In short, what does he bring to the workbench in addition to passion and spilling blood for the art? If the answer includes nothing, as in there is no connection – I doubt he’ll have a career in framebuilding.

What we all do during our work weeks, and the products we make to order – these are inseparable from the very sport that tests the limits of what the industry offers. What is life without competition? I’m sure my brand wouldn’t have one without it. 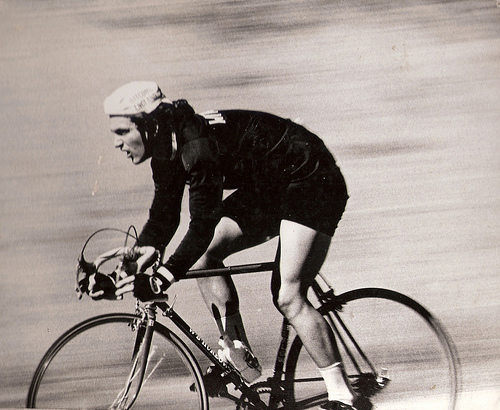