How My Present Reflects My Past

Here is a letter I received from Bill Hurlow. It regards the second of three frames I would commission from him before I even left my comfort zone here in the States and landed in Southeast London at Witcomb Lightweight Cycles. One of the reasons that I wanted a piece of the trade for myself was rooted in the many exchanges I had with Mr. Hurlow. I was probably a typical client, not unlike the many we (my peers and I) have now. A lot of questions. Followed by a lot of questions about the replies I was getting. Always trying to keep the conversation going if for no other reason that this very nice man in England was always there, ready to send me one more letter to counter mine. How did these cats ever get any work done?!

As a client and budding enthusiast, I wanted to know everything. I probably thought that by dint of my being in the queue, I had access. And with that access I was entitled to so much more than the actual frame and fork I was commissioning. Where were the boundaries? If they ever existed back then, I didn’t see them. That Bill Hurlow answered all of my letters and questions had a huge influence on me, such that, years later when I was getting my own self entrenched, I made efforts to take the same time and extend to my clients the same personal attention that Mr. Hurlow afforded me. How do I ever get any work done?!

Framebuilding is a strange business atmo. Most of the cats I run with just want to make frames. But it wouldn’t be much of a business without clients. Allowing these clients access is also part of the routine. Framebuilding is nine parts personal service and four parts bench time. No matter how many folks are in the queue, or how long the quoted wait for each person is, when a call or an email arrives from any of them, it affects the framebuilding process. Oh wait, the face time and e-time is also part of this. How do we ever get any work done, huh?!

I ended up with W.B. Hurlow number two some time in late 1973 if I recall correctly. It was late, as was the first and the third. Coal strikes. A bad knee keeping him from working prolonged hours. An unplanned holiday. Materials shortages. It’s always something. I’ll also include that face time and, in the case of my orders with Bill Hurlow – all those letters, and I mean ALL THOSE LETTERS – also kept him from hitting deadlines. It’s always something, even when it’s not a client who wants to chat or trade fourteen emails in a day and a half. But without clients, we’d have very little to do.

Also of note – Bill’s letter does a very nice, PC (before the term even existed) turn at letting me know that, of the two of us in the relationship, he knew more. I was probably trying to have him assemble a Frankenbike montage of poorly chosen design elements, and he was very careful to talk me off the ledge before I jumped. That’s a life lesson that I didn’t incorporate into my routine until the end of the 1970s. If I make the bicycle and it reflects my vision, experience, and commitment to the trade, trust me – I know what goes where. In Bill’s reply to me you’ll see I asked for a few things that just did not make sense as a whole. His job – the one he’s getting paid my money for – includes his steering the ship. I listened to him. I’m grateful folks listen to me.  That’s how the work gets done. 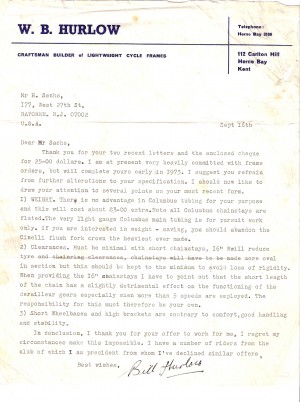 « The Bicycle, The Sport, And Me
Toto, I’ve A Feeling We’re Not In Houston Any More »