I have a non-cycling question for you. Don’t ask me how, but the Peddie School came up in conversation today; which got me to thinking about you. I was under the impression that Peddie was a pretty large feeder school for Princeton, but after doing some simple online investigating Princeton isn’t in the top 10 colleges for Peddie grads since 2005. When you were there was it a Princeton feeder?

How did you end up at such a prestigious boarding school? Do you feel that any of the Richard we see today was a direct result of your time there?

Did you ever feel pressure to enroll at a high brow college like I am sure many of your classmates did?

Thanks for indulging me.

i think many schools (like Peddie) are broad-stroked as being feeder schools to places like princeton. how did i end up there? well, after eight years at a yeshiva (look it up) i spent two at bayonne high school and the contrast between the cultures of independent and public school was huge. during my first two years at bhs, i drifted further from the discipline and self-motivation i had been used to and ended up doing near to nothing with myself, academically. my mother, who was a teacher, principal, had pioneer status in the new jersey Head Start programs, and who would also go on to work for the state mentoring future principals – she (my mom) didn’t want me to become a statistic. so, after two year of partying, carbonna sniffing, lsd tripping, and taking the Path train to the east village pretending i was of age and drinking at mcsorley’s every weekend, i had a choice: new york miltary academy OR the Peddie school. off to hightstown i went.

from the moment i was dropped off, indoctrinated, met room mates, and began to understand what independent boarding schools (like Peddie) were all about, i embraced the culture. i come from a working class, row house, blue collar neighborhood existence. Peddie, while a private school, was not a blue-blood, straight-from-a-mayflower-family type place. yes, there were many cats there who came from good (and famous) families, but it wasn’t the norm. there was a good mix of backgrounds, races, and personality types. for me, the experience crystallized early on in mister roberts’ english classes. don roberts was vigilant about keeping a diary; it was a requirement. so, with little to no writing experience, i was forced to self-start that chapter in my life. it didn’t matter what we wrote, AS LONG AS WE WROTE SOMETHING EVERY DAY. these exercises morphed into a favorite thing to do of sorts, and almost a hobby. i embraced the writing and “expression” thing. the first winter at Peddie there was a school wide creative writing contest called, of all things, The Dimes. every student was expected to submit an entry and the english department would judge them and declare a winner at the next assembly. i was a new boy and a sophomore, and when i heard my name called as the contest winner that fateful day in december it was incredible (i hate that word). no matter what i wrote about (it’s irrelevant to this post) or what i was judged against, being singled out for the effort became an important spike on my evolution time line atmo. by spring i was on the board of the school’s literary magazine called The Amphion and went on the edit it for the three years i was at Peddie. the writing thing was in my blood. i should add as a caveat, that while i do have these experiences and often summon them up, we are really only speaking about scholastic level writing; high school aged boys writing about what (little) they know. but it was my writing, and the enjoyment/fulfillment was my enjoyment/fulfillment, and that’s all that mattered atmo.

during senior year, all Peddie boys are expected to apply to four (only) colleges. i saw myself as a creative, head-y type and duly applied to Bard, Bennington, Antioch, and one other school whose name i cannot recall. all said no thanks. getting shot down at all four schools was a Peddie first. so, i then applied to Goddard and Franconia, both great schools in their own right but both were colleges that no Peddie boy had ever sought admission to. both said yes, and i was Goddard bound that next fall. entrance got postponed from september to april, and the rest is history and more than well and exhaustively documented in other posts here as well as in articles on my site. fast forward note – not only was i probably the only Peddie boy in generations to 1) not go straight on to college after the summer, but i was likely 2) one of the only alums who chose to bypass the college experience altogether.

the money my mother used to send me to Peddie was the best money anyone ever spent on anything atmo. the campus experience during my formative years shaped me for the rest of my life. i embraced the atmosphere, the traditions, the bonds, and the collegial experience. and i became a zealot for the institution, donating money back to Peddie as often as i can, as well as promoting the school as being the single biggest influence in my life after my family.

i’ve only cracked the surface of this in reply to you, but i have to get back to earth now. before i end this, i’ll paste in a letter i received from another Peddie boy. though old and yellowed, it remains ones of my life’s treasures and made me believe that everything is circular. 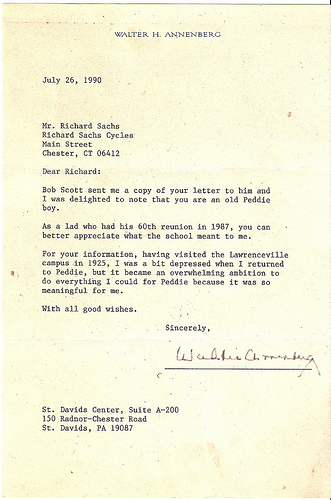