The Energy That Runs Through Us

The North American cross scene has many variants, but only one constant: the Richard Sachs Cyclocross Team. Since 2003, RSCX has come to represent everything that makes the muddy discipline so beloved of its practitioners. More than a team, they are a family of riders, from teenage to old(er) age, of varying abilities up to elite, who prioritise a sense of belonging and enjoyment over pure results. As the team’s eponymous figurehead, and one of cycling’s legendary frame builders, Richard Sachs, says: “There is an energy that runs through all of us.”

This season, RSCX are kitted out in Rapha Custom. We spoke to Sachs to find out more.

I got hooked on cross when I lived in England as a teenager in 1972. By the end of my stay there, I’d already been to a bunch of races, and the world championships when it was held in Crystal Palace, London. That’s when the needle got in the vein for me, but there wasn’t much of a scene back home in America. It really wasn’t a thing yet.

In 1982 I became the sponsor of a team I was riding for. It was a road team, primarily racing Cat 1 and Elites. In the late ‘90s we had some developmental teams and then we started doing cross too.

“WE WERE ALL GETTING OLDER TOGETHER, TAKING THE SAME LEFT TURNS, GOING UP THE SAME CLIMBS.”

We hopped over the line to only do cross from 2003. I saw road as boring, with nothing to develop. It was the same events, same weekends, same people. We were all getting older together, taking the same left turns, going up the same climbs. Cyclocross, by contrast, had this amazing flow of energy, atmosphere, fun, of making memories at the venue, of being fan and spectator friendly. By ‘96, ‘97 I thought ‘this is where I want to be, with a group of people that seem happy, and who aren’t just going through the motions.’

“I FEEL OF IT MORE AS A BAND, OR TROUPE… AN EVER-EVOLVING LIFE FORCE.”

RSCX is a family. This organisation, or team, or club – it’s all of that stuff – is a line that runs way back to 1982. We’ve had a lot of people grow up and race and get old and leave and still stay in touch over the many decades, so when I isolate the current group, it’s not like this is the group, it’s just part of a long descendancy of people who’ve been part of it. I feel of it more as a band, or troupe… an ever-evolving life force.

This is not just me – my wife Deb is my partner in this caper. Nearly everything here comes from the two of us. That maybe speaks to why RSCX seems like a family. But we’re not the parents, and don’t act like them, because we think of all these people we race with as our peers, our friends.

“THIS ENERGY THAT RUNS THROUGH ALL OF US FOR THOSE TWO DAYS A WEEK.”

Every weekend we go to the races and set up a little ghetto at the parking lot. It’s where everybody hangs out together and we put the tents up, have the bike racks, etc. There are bikes, luggage and helmet strewn all over the place. Those weekends have got this wonderful atmosphere of camaraderies that you can’t really describe. For me, and hopefully everybody involved, this energy that runs through all of us for those two days a week, is like fuel. It’s like sunshine. It’s like oxygen. It’s all those things that make you feel life is so wonderful. That’s what it is.
. 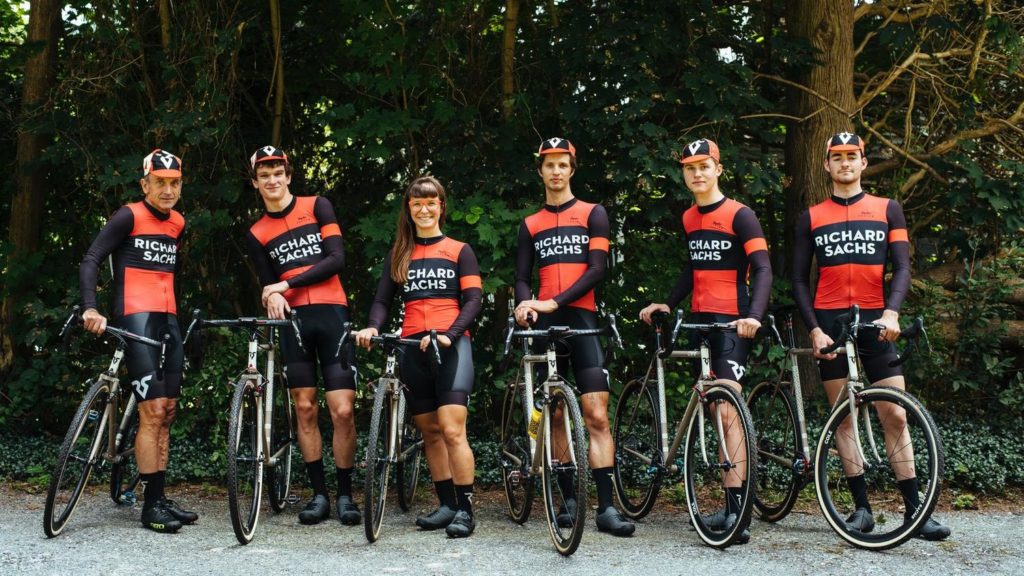 To view this article and all of its images, visit Rapha.cc