The Fragrance Of Framebuilding 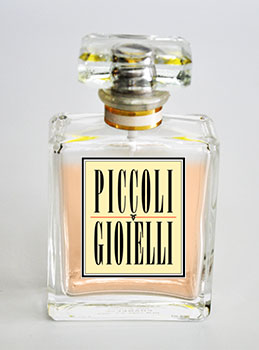 it happens every year, and signals the inevitable and inexorable build towards the biggest anti-climax of the year: christmas. it’s as if free rein has been offered to the world’s advertising agencies and video directors to either make use of footage that failed miserably on a previous campaign, or to encapsulate several dreams that never made any sense anyway. television advertisements that infuriate everyone i know; indecipherable, inscrutable and thoroughly incomprehensible, made all the more so by the presentation of a previously unheard of brand of perfume right at the very end.

there has to be some collusion between advertising agencies and their sub-contracted video directors, for though the impending festive season seems to have no adverse effect on any other form of televisual advert, each and every perfume advert seems comfortable to inhabit the world of the bizarre.

though there is little doubt that those ill-timed advert breaks in soaps, cycle races or movies are infested with product presentations that prompt an involuntary wtf?, the object of the exercise is to create a memento that will annoyingly worm its way into the cognitive part of the brain in the same way that a britney spears tune played in the supermarket will have you spend the rest of the day trying desperately to forget it. if next-day chat in the office is found to be discussing an advertisement, even if only to castigate its conception, there’s every likelihood that it has done its job. 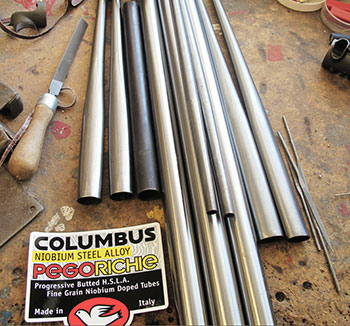 this only and singularly fails when the advert is memorable, but the product it’s advertising remains haplessly obscure. that might commend the director, but presumably not the agency. quite how the aforementioned perfume adverts fit into this explicable scheme, is quite beyond me. i can honestly relate that the various fragrances on display have failed to lodge in any part of my brain, cognitive or otherwise, but it is more than likely that i’m far from being the target market. and at least when christmas recedes from memory, so apparently, do the advertisements.

what i have picked up from these bizarre interruptions, and i think this perhaps indicative of a brain that is open to shapes more than it is to messages, subliminal or otherwise, is the increasingly convoluted shaped bottles into which these unmemorable perfumes are poured. once was the time when bottles of fragrance were of limited contours, but now, presumably in a concerted attempt to distinguish one from its neighbour/competitor, it seems anything goes. at this point, it may assist my narrative to introduce the nature of my enquiry and just how it all fits into a relationship with the contemporary steel bicycle. 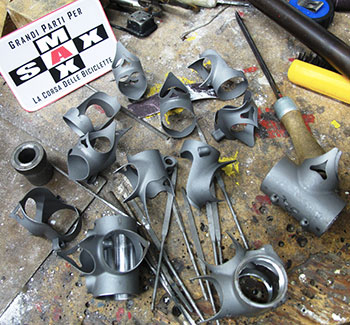 the fertile mind of the inimitable richard sachs predominantly concerns itself with the daily construction of beautiful steel frames, objects of desire that are in sizeable demand, leading to the man’s legendary waiting list. however, though steel has been experiencing a resurgence over the past half-decade or so, this has not always translated into a concomitant wealth of resources to keep not only richard, but many of his peers in day to day business. gone are the times when steel tubing, cast bottom brackets, lugs and dropouts were in plentiful supply. rumour has it that production of colnago’s master frames, with their personalised, fluted tubing is slightly restrained due to the exclusivity of that columbus tubing. though the frameset may still be in demand, that has diminished considerably with the advent of wall to wall carbon.

that, at least in part, has a bearing on the frameset’s ever-increasing price point. 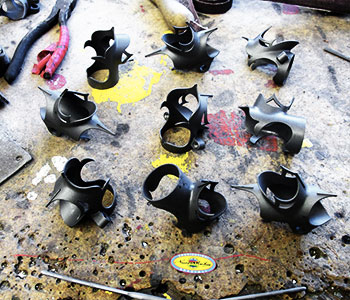 i have covered this dwindling of framebuilding resources on a previous occasion; indeed, the very items front and centre in the current discussion will perhaps come as no surprise to several of you. piccoli gioielli: little jewels, to render the italian phrase into english. and their purpose has not altered, for the piccoli gioielli constitute perfectly formed front and rear dropouts, as perfectly formed as the late lamented campagnolo dropouts of yore. what is new, however, and a testament to mr sachs’ extra-curricular thought processes, is the decal that will adorn graphic representation of the little jewels.

“Now all of my frame parts and pipes have quirky little names and marques to go with them, atmo.” yet, now that all has become somewhat clearer, there is still the small matter of why on earth any reference to perfume, fragrance and its associated pre-christmas enigmatic advertising regime. “The Picolli Gioielli marque began with my desire to have something evocative of a label that might appear on a perfume bottle (French, by the way) and use elements of maybe Eisenhower era graphics. I mean, these are dropouts for Christ’s sake, and the logo had to work with little cast parts, and the little cast parts had to work with the logo.” 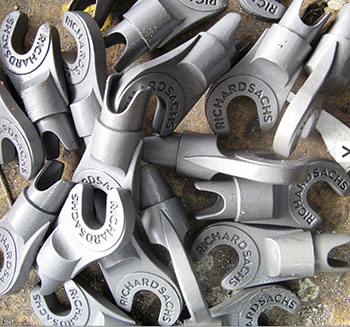 yet though the concept behind each of richard sachs’ marques as he is endeared to call them emanates from the workshop in warwick, massachusetts and presumably from connecticut prior to that, the final artwork is the result of the considerable graphical talents of chuck schmidt in pasadena, california, he of www.velo-retro.com fame. in a previous life, schmidt taught design at the pasadena art center. it should be made mention of that chuck schmidt is not responsible for the richard sachs logo seen between piccoli and gioielli, nor is his the design of the lettering on the downtube of each red painted frame.

that is another story for another time.

while most are content to invent or produce with perhaps their own pet names for each item or fabrication, richard sachs has made almost a secondary career out of offering up appropriate names and logos for each. in order to provide cast parts that might equitably find use with oversized steel tubing, a saxmax range of bottom bracket castings endorse their own graphic identity. similarly, in conjunction with dario pegoretti, a custom drawn series of columbus tubing emerged to the tune of pegorichie. these are joined in the framebuilder’s cupboard by richie-issimo, nuovo richie, newvex and rene singer cast lugs. with the picolli gioielli cast front and rear dropouts, the set is complete, as is each graphic appendage. 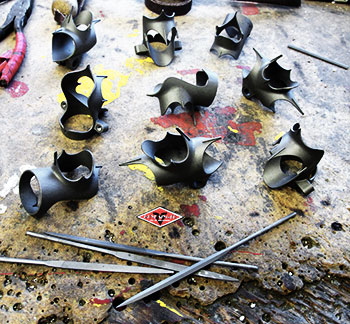 one or two of the above have adopted the graphical style impressed by their parodied namesakes, and very cleverly too. tim hilton made mention in his excellent book ‘one more kilometre and we’re in the showers’, that cycling seemed home to a greater than average number of artists and graphic designers, for which contention, were evidence required, the partnership of sachs and schmidt is surely highly appropriate? it is also worth bearing in mind, i feel, the connection between the richard sachs cyclocross team and long-time sponsor house industries, a delaware based type foundry with impeccable design credentials.

one can only hope that the perfume bottle remains solely a graphical inspiration and that this excellent new marque finds itself on a t-shirt sooner, rather than later.