There Are No Apps For Wisdom

Last week I spent some time in Chester, my former home town. I was there to see the accountant and to double dip by collecting some long overdue parcels I set aside when the relocation happened some three years ago. In one box I found a trove of correspondence from my time before entering the trade. Bicycling-wise, in 1971 I was an enthusiast and very, very new racer boy. Everything about the sport and the equipment consumed me.

I was hooked on bicycles by 1969 or so and bought my first real one by 1970. It was a Frejus Tour De France and, yes – I bought it in Harlem at Tommy Avenia’s. The years that sandwiched my interest in all this are a blur but old letters and invoices help jog the memory atmo. During my three years at The Peddie School I spent a lot of time in Princeton. The town was about nine miles away and I would often cycle over there to spend time at Kopp’s Cycles. The owner, Fred Kuhn and his helper, Dick Swann, are as responsible as anyone or any single turn in the road I was pointed to, for instilling a love for this life and lifestyle I ended up with. Even before I left Peddie, I had fantasies of wanting to be either of these two men. I know they had this effect on many who passed through Kopp’s. We are the lucky ones.

Away from Kopp’s Cycles, Dick Swann also wrote for Bicycling Magazine. His duties included replying in print to folks writing in to a column called The Answer Man. I wrote often. But I also used the back door and wrote the same types of letters and mailed them to him at Kopp’s. Relentless is as relentless does. Here is one of those letters. I transcribed the text because my penmanship was so poor. His reply is scanned and lives at the bottom. Reading these again this past week brought back memories. Good memories at that. Dick’s words at the end, “use your ears and your eyes, not your lips (etc etc)” made sense then and make even more sense now. There are no apps for wisdom.

For the record, my letter to him was an amalgam (I love that word, amalgam…) of questions based on several subjects ranging from bearing types, to frame dropouts, to makers of freewheels, and also encompasses some concerns I had about a tiered list of framebuilding shops in England. He had composed an earlier reply to me in which his point of view included that the top rung in Great Britain included, and was limited to, Hetchins, Hurlow, Condor, Evans, and Young. That letter (it’s here someplace, I am sure) and its contents made a huge indelible mark on my psyche and for a long time I judged everything through a lens Dick created with his opinions and replies back to me.

It was good to hear from you and I am grateful for the ratings which you’ve sent. From a possessive point of view I’m glad to see that Bill Hurlow is first class. There are still some things I’d like you have you answer.

I can understand why caged bearings are inferior to properly fitted and set balls.. I’m also considering using a Stonglight head set and bottom bracket on a proposed frame. I can agree with the use of derailleur pulleys with bearings rather than with greased bushings. But what I cant see is the difference in whether I ask for Campagnolo or Simplex frame ends. I chose Campagnolo because of their ability to accommodate the Record derailleur.

Perhaps you can explain the difference between the Gran Sport and the Record derailleurs. In the catalog, the G.S. is pictured with one lever. Perhaps this suggests its use is dedicated to a single ring crank set.

What is the American Zerk B.B. that Arne Eastman speaks about?

How come the Cinelli Aluminum Alloy 1A 100mm stem refuses to fit into the Hurlow fork? I hope the 90mm stem that Fred is sending to me fits. I wouldn’t want to use another type.

From an engineering point of view, what are the differences between Everest and Regina chains and freewheels? I am using the latter. I have tried the Everest freewheel and it is definitely a noisier mechanism than the Regina.

Perhaps you remember our conversation when I told you that of all the framebuilders I wrote to regarding apprenticeships, Witcomb was the only one who responded in the affirmative. I wrote to Holdsworthy, Falcon, Harry Hall, Condor, Jack Taylor, Bob Jackson, Woodrup, Gillott, Hetchins, F.W. Evans, Geoffrey Butler, Mercian, Harry Quinn, W.B. Hurlow, and Ellis Briggs among many others. The underlined builders responded negatively. The others have not replied at all. It is with such a passion that I want to be a disciple of the English School of framebuilding. So it looks like I’ll be with Witcomb. I still hope that someone like Hurlow, Condor, or Hetchins responds affirmative. This would “make my day” for years to come. If you know of any other roads to take as far as learning the art of framebuilding, I would appreciate hearing of them.

I hope Kopp’s Cycles gets my saddle (Cinelli Unicanitor Tour de France No.3 in suede) and my stem (Cinelli Aluminum Alloy 1A 90mm with flush fitting allen bolt) soon because my Hurlow is dying to be outside on the road. 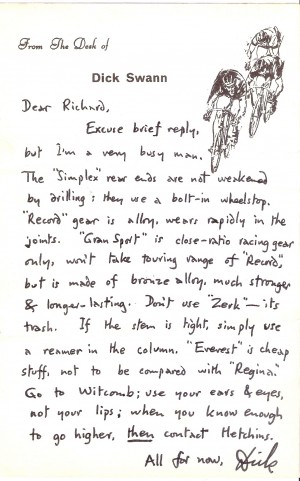