We walk down many paths and often have to decide which way to turn. A right or left can enhance or upend all that came before it. Sometimes we can think about direction, and then take it. Other times, we’re just taken. That’s how I describe my introduction into the world of fine bicycles.

As a student in Hightstown and already riding a 10 Speed, I found Kopp’s Cycles. Or did it find me? Or was I brought there by fate? Regardless, when the little store on a side street in Princeton made my radar, life changed. Fred Kuhn owned the place. And he was a man of conviction. It’s wrong to say I knew him when I was only a 16 year old, but the three terms I spent nearby and frequented the shop contain some of my strongest and longest lasting influences.

I got to know Fritz better after I graduated and left the area, did my London stint, and ultimately landed in the trade some years later. I never let him forget that his energy and forthrightness got deep into my soul. I should have been paying attention to my lessons at Peddie School. But I hid a secret side that couldn’t wait for the times I’d pedal the eleven miles to see what was happening on John Street.

When I was a teenager and making weekly visits to Kopp’s Cycles, I fantasized about growing up to be just like Fred. He seemed, no – he WAS, so comfortable in his skin. Few of us get to walk exactly the right path at the right time. From my perch, Fred did. He always appeared to be in a good place, and I felt that way whenever I was in his presence. 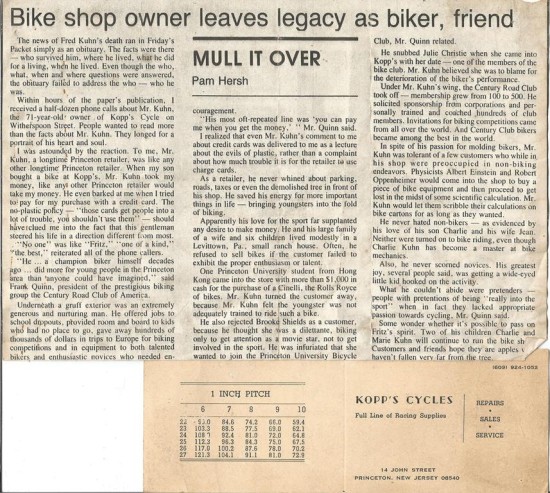