Going to Italy in 1979 would open my eyes to another world (read: how shit really gets done) and also – possibly – be the end of my first phase as a framebuilder. I’d refer to it as The End of the Innocence but I no longer do anything Don Henley since the 2013 Eagles film came out. That dude trashed his past and his inner circle as far as I’m concerned.

I rolled along for most of the decade and made a metric shitload of frames. Business was good. But I’d taken my training and experience in London as far as I could. I had this nagging feeling that I lacked the tools (he points to head with forefinger) to do much more. I also watched the playing field get smaller by the season. Folks were moving back into their mom’s basement, or working part time, or veering into modern dance. At least two of those things actually happened.

Once abroad, I realized how my approach would have to change in order to continue once back on American soil. The moment that crystallized it was a shop tour at Bike Machinery. The firm made many of the fixtures and measuring devices for the FWDs (Framebuilders With Depth) in Europe. My self-esteem wouldn’t return until I had some of what they were having.

When The International Cycle Show closed in 1986, I broke down my booth and walked over to meet Signor Seghezzi in his. We’d agreed to a cash deal that allowed me take my new 700 pound love interest down the elevator to the garage of the New York Coliseum and home to Chester. My contraptions, V-blocks, bungee cords, and spring clamps gave way to the Hydra I use to this very day. 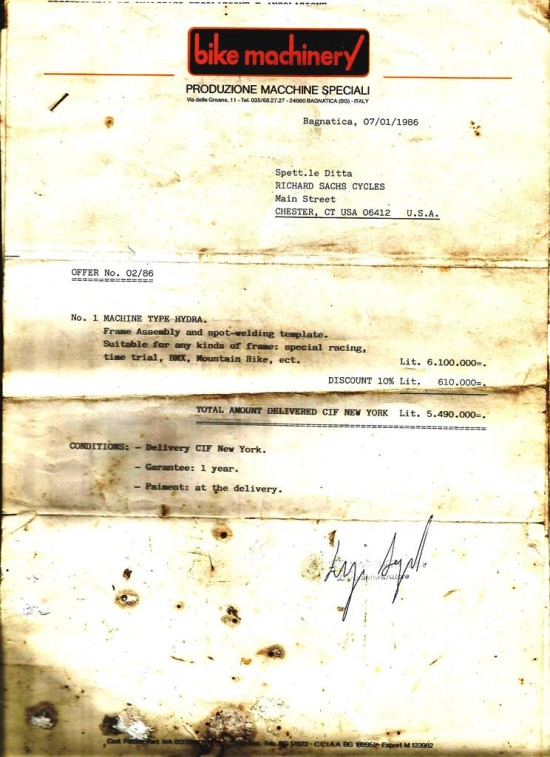