This is a letter from Neville Smith. It was sandwiched between so many other sheets of paper from the 1970s and I rarely gave it a second glance. When leafing through the folders, the hand drawn images and numbers always looked back at me while I searched for more interesting pieces of my puzzle. And then tonight I did something I rarely do – I focused. After seeing this yellowed page for the hundredth time, I realized it’s one of the first orders I received after leaving Witcomb USA to begin anew.

August 1975 was a pivotal time in Chester. I was busy making benches, having decals made, sourcing material, buying fluorescent lights, and opening accounts with various tool suppliers. I don’t even think I had torches then. The goal was to be ready for the International Cycle Show in New York that February. I went to the Coliseum at Columbus Circle with a load of bicycles and some frames, and never looked back.

Neville Smith was a bit of a fixture. He’d show up regularly at the East Haddam shop and regale Peter and me with stories from his life as a racer during the Six Day era. Even then, Neville was quite a bit ahead of us, age wise!

This was the eleventh RS made and the first track frame to bear my name. It’s number 115 in my log book. I know some people collect facts like this. A local cat named Sonny Braun painted it a nice blue color using automotive enamel. The frame ended up in Oz and was the subject of a photo spread on the FYXO site. Click here to have a look. 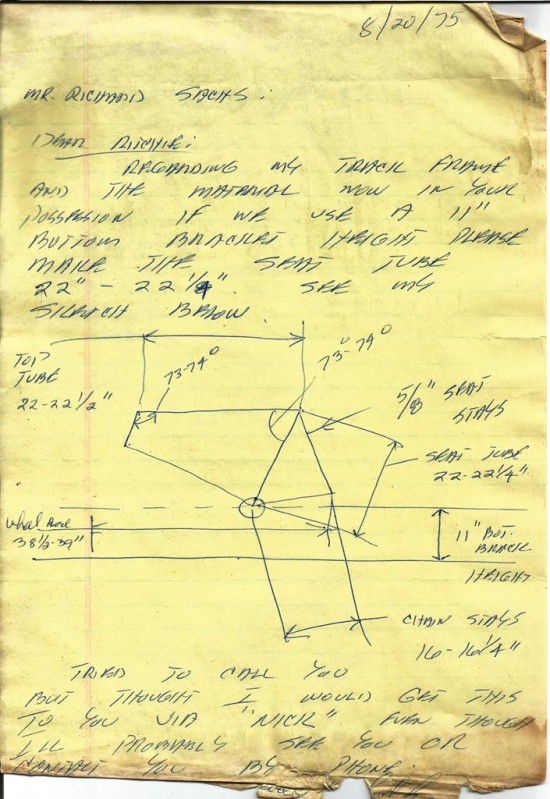