A Life Of Practice

There were lots of comments on my Facebook post from last night as I mentioned watching Jiro Dreams of Sushi for the twelfth time. Each viewing is different. Most of it I can recite à la Rocky Horror Picture Show. Yeah. Then there are the times I see a segment within the film and realize that I never fully processed it.

On Friday, I zeroed in on the concept of Shokunin, which loosely translated into internet-ese, is about mastery of one’s profession. It’s speaks to repetition and routine, two traits I’m beyond relentless about. I wrote 500+ words on this in 2012 without even considering sushi, or Jiro. My text appeared before the documentary was released. Now I’ve come full circle and believe a life with a singular pursuit is one well lived. That said, to attempt to do one thing superbly well doesn’t mean the same object is made over and over and, well – over again.

According to my opinion, it’s a life of practice. A career of practice. I saw that (again) in the film as I watched it one more time. I’m aware that others live it. But I don’t see much of it in my trade. There aren’t many who appear to exhibit a degree of self-examination, at least as far as the craft of bicycle making is concerned.

The caption in this screenshot says it all.
. 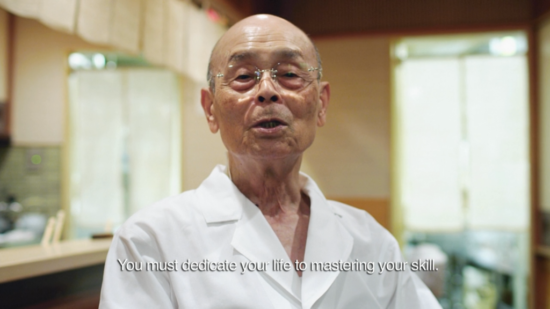