If looking back just to see if I’m still there tells me anything, it’s that I’ve been in front of a few cameras when the cats from makeup and wardrobe were on their union break. I mean, an opportunity to share my story in Winning, a widely read magazine in its day, and I show looking like it’s a casting call for Do The Right Thing?!

The nineties were wide open in my end of the industry and stories about those still standing in it. To say the landscape was barren would be an understatement. Through the decade I found myself pushed further outside. I was in it for the long haul, but grew tired of the same questions asked in slightly different ways from the same few folks who were self-appointed beat reporters for the niche. The disinterested and bedraggled look was my way of saying I don’t care. It was about anti-caring. But it was a look. And it would evolve just as I would.

My pal Alan Coté wrote this superb article in 1994. I made him a bicycle, covered the bullet points, and waited for a photographer. Peter Brentlinger shot the images. He and I had a rapport from previous assignments. My memory has faded but I think our history together led to me asking him to shoot the glam shots for my really expensive, eight page if not more, four color brochure produced before the end of the century. By that time I surely realized that a portrait lives its own life and I should pay attention to the message I was sending.
. 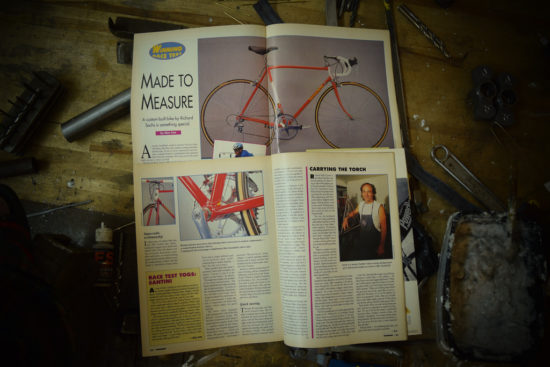