As evidence of his love of the sport and his legend as a frame-builder, Sachs has three flawlessly crafted, SRAM Red-equipped Richard Sachs racing bicycles on display in his booth in Sacramento.  But try not to set your hopes too high on ever owning a custom Sachs: His wait list is as long and legendary as his career as a frame-builder.

Richard Sachs is also an unabashed devotee and champion of the steel bicycle.  Years ago, the mass-produced bicycle industry steered violently away from steel as a building material, and, as a result, much of the ferrous frame-building  supply chain went dry.  Rather than bend to industry trends, Sachs became his own source for materials and a supplier for his frame-building peers.

In 2002, he introduced his first set of modern era investment cast  OS (over-sized) parts, the Richie-issimo series of lugs, fork crown, and bottom bracket shell.  Over the next decade, he’d add four more lug styles, including the Sax Max ÜOS (Über-Over-Sized) lugs and bottom bracket shells that he debuted at NAHBS 2011 in Austin. 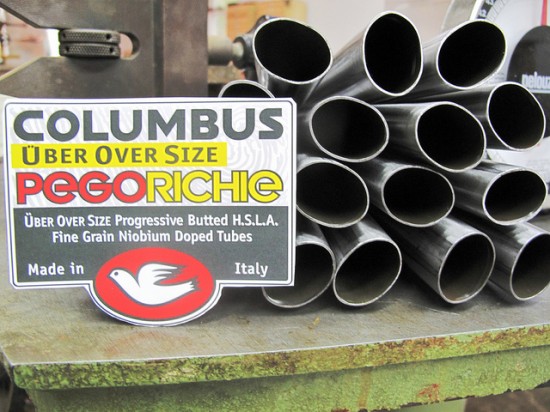 For NAHBS 2012, Richard Sachs is introducing a new PegoRichie ÜOS tube set and ÜOS fork blades to complement Sax Max lugs.  A tribute to the legendary Columbus Max tubing, ÜOS is an updated, larger-diameter version of the PegoRichie tubing he co-invented with Italian builder Dario Pegoretti back in 2004.

“We set out to create a new set of tubing  specifically for frame-builders who build lugged steel framesets,” says Sachs.

The original PegoRichie is a proven 21st century frame material that is in widespread use among frame-builders worldwide.  And just like its predecessor, says Sachs,“Über-Over-Size PegoRichie is for those who work in the traditional manner to make modern and compromise-free racing bicycles in an era when most other frames come out of a mold and from a far away land.”

Sachs completes the Sax Max series with a new investment cast fork crown.  When paired with the new ÜOS fork blades, according to Sachs, “The new fork parts alone represent what might be the single biggest improvement in materials for our niche in the last two decades.”

And the frame-building supply offerings don’t end there.  Alongside the raw lugs and pipes on display, Sachs is also offering new investment cast dropouts, named Piccoli Gioielli, or “Little Jewels.” 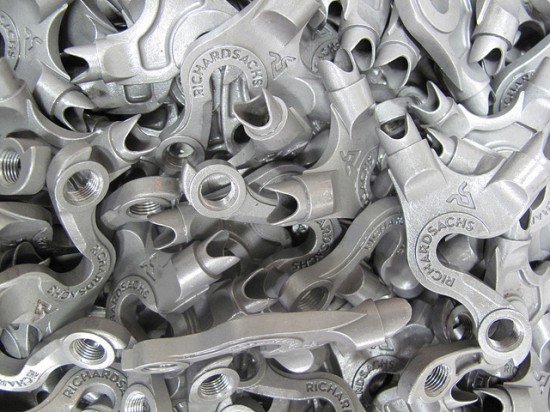 Joining Sachs in his booth this year is photographer/ film-maker Nick Czerula.  Nick spent more than a year documenting Richard as he reinvents the tradition of bicycle building and racing, which resulted in a fantastic book of black & white photographs, RICHARD SACHS – bicycle maker.  Czerula will be on hand all three days of NAHBS to discuss his experiences and sign copies of his book.

NAHBS insider tip:  there’s no wait list for the book.

The above article originally appeared here – NAHBS: 2012 Show News, and was originally posted on February 29, 2012.