One way for elegance to endure is to breed it. It’s like The Boys From Brazil, but in a good way atmo. In late 1982, my supplier in Japan used me as a resource for a new project to develop a set of investment cast frame lugs. Two data points: I thought cast lugs were stupid. They were cheating. They were a shortcut for the unskilled, the lesser skilled, and the lazy. And secondly, everything that was cast and offered to the trade was ugly and almost designed by committee. Now, I was being given a chance to change that. I’d been using Nervex Ref 32 lugs since Day One. I believed them to be perfect. I was good at transforming them from their as-delivered state into lovely little shapes with tapered edges and beautiful transitions from tube to tube. The left and center lug in the graphic speak to this. I sent my handmade sample set of three to Japan and was hopeful that I could assist Takahashi Press Co. Ltd. to (finally) introduce elegance through the technical process. As months passed and several notes exchanged, the final iterations arrived (see lug on right). The cast versions of my originals looked clunky and industrial. They lacked grace. They were inelegant. But they did make it into the marketplace. I never used them. In 1983 I didn’t have the business savvy and social skills to let the supplier know my true feelings about the project. Something went awry; something got lost in translation. None of this made me any less proud to be involved. It was my first design project but not my last. Produce shit or die.
. 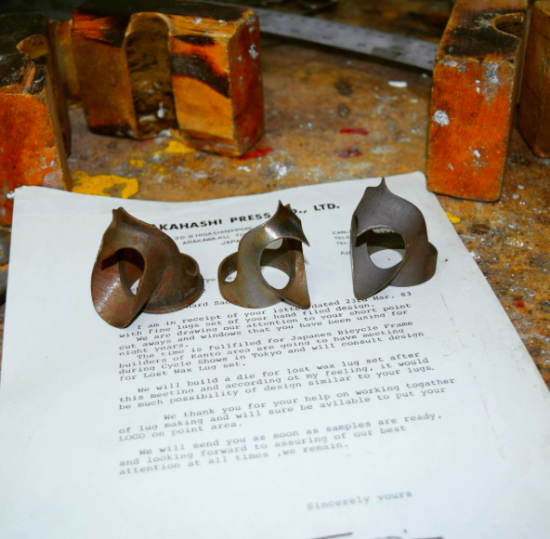 « The Highest Level Of Design
The Day The Future Happened »