I arrived in Chester as a nineteen year old and fast became a village creature. The village was the one block stretch where humanity congregated. There was Robbie’s Store, the Chester Bank, a locally owned pharmacy, two package stores, Hawk’s Grocery, The Pattaconk, a hardware store, Betty’s Pants Outlet, and Janet Sachs (no relation) Real Estate. There were about eight businesses and as many empty shops. And when I left in 2009, the shops had become shoppes, there was a vibrant arts, retail, and dining scene, and the edgy hamlet I found as a teenager was now a destination. Big Yellow Taxi.

Over 37 years, I had four spaces, each within 100 feet of one another. The first was a windowless barn I rented from the Archambault’s. After two years, I moved to Kim Senay’s out building at Spring and Main. A decade later I moved to the basement at One Main. And in 1996 I purchased Nine North Main where this image was taken.

The NoMaChé (a Manhattan-y name I invented for our lane) location was also where we lived. Zoned commercially, the first floor, once a lamp shade store, became the perfect landing spot for this lifelong renter. The apartment was upstairs through a side entrance. Deb had created a lovely courtyard hidden from all pedestrian traffic. It was a paradise, and we called it Cuba.

My studio in NoMaChé had a front room dedicated to the articles, mementos, and ephemera from my life until that point. I ultimately smothered myself with myself. When I moved to Franklin County, and again back in Deep River this past summer, the goal was to walk away from all reminders of who I was and be a maker with no past. The walls have remained bare ever since.
. 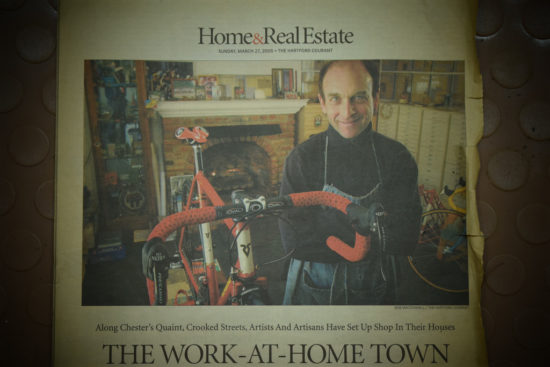