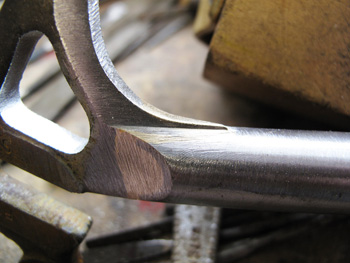 “needing some air, he went into the garden. “ah, look at the afternoon light,” he said, for shadows were forming dark zones in the pasture recesses, as they do in his masterpiece, ‘the mountain.’ he went over to a small shed in the corner of the garden, the back wall of which was made of finely carved wood shingles arranged in a design. “you see,” he said, ” the trouble they took for something that could not even be seen. that is what has been lost. it was lost when workers began selling their time. or as you say in america, when time became money.”

the above piece of text comprises the words that greet visitors to richardsachs.com. quite the philosopher is richard, though i confess that i do not know from whence the quote comes, but the last sentence is the one that has perhaps the greatest relevance to the article in hand. if time has indeed become money, and there are many areas of commerce in which that has become true, then we’re looking at price points rather than craftsmanship. i’m not one who disdains the world of carbon vis-a-vis the skills required in relation to the art of mr sachs, where the hands, eyes and brazing rod are king. just as the majority of us couldn’t mitre two bits of tubing together, neither could we figure out what proportion of resin to carbon matt should be popped into the mold.

a skill is a skill, art is art, no matter the fabric of the end result.

progress dictates that techniques will change over time, as new technologies are discovered, and procedures are refined. but in many cases these are dictated by the number at the bottom of a spreadsheet, rather than purely on aesthetics and quality alone. richard sachs, along with many others of the world’s great builders, still produces frames where quality is the standard that judges when one is ready to leave for the paintshop. take a look at the beautifully filed dropouts accompanying this article. while many of us are dictated to, and not always unhappily, by the national minimum wage, there’s an outside possibility that richard’s hourly rate becomes severely depleted during these extended bouts of file activity.

that’s not his primary concern. 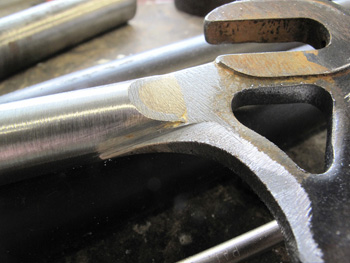 there’s a trade-off between something as eminently desirable and distinctive as a lugged steel frame, with fastidiously filed and shaped road dropouts, and its performance relative to the carbon fibre (fiber?) that wore the king of the mountains jersey in this year’s tour. while the carbon is pushing the limits of what can currently be achieved in this direction, richard sachs, vanilla, tony pereira, ron cooper, dario pegoretti and others are calmly pushing limits of their own, limits not entirely directed at ultimate performance. those in the carbon world are using finite element analysis to evolve their modern frames; if the computers are correct, then eventually, and it can already be seen in the world of four wheels, everything will look the same. carbon is an endlessly malleable material, far more so than steel tubing, but there is many an indiscretion being visited upon the black stuff in the quest for differentiation, that ironically is sending everyone on the same goose chase.

meanwhile, richard sachs et al calmly proceed with their craft, building bicycle frames in the same way today as they did all those years ago, aiming each and every time to perfect their art, something attained in each instance; until the next one. each and every one of them has to make a living, and can command healthy amounts of money for their output, but it is rarely the hourly rate that is their principal objective.

as the modern world encroaches in multifarious ways, it’s worth remembering that the hand-crafted steel frame is just as modern. but rather than exploring new avenues of stiffness and rigidity, its progenitors continue to perfect skills judged principally by their own standards of perfection. quality control is in place throughout the industry, to a greater or lesser degree, but in the case of the individual builders, they are not only the fabricators, but also the quality control. stepping back along the line, they are also the design department.

ultimately, a bicycle is a bicycle; all look and function similarly if not identically; the art lies in the fastidious attention to detail that is oft-times concealed beneath several coats of paint. that is where the similarity perhaps ends.

you can see an entire richard sachs frame build here.

The preceding article was originally posted on thewashingmachinepost on August 17 2010.

« the tao of atmo
The Custom Road Bike »