The first time I used the words imitation art in a sentence actually cached on the internet is found in a text I wrote called Period Correct. The story was about the restoration of my 1971 Masi Gran Criterium. When that bicycle was made, framebuilding was oh so close to entering a transition. Within a year or three there of this very lovely frame being assembled in Milano, there would be a paradigm shift away from made-by-hand and over to manufactured. There was a time when the folks who worked at the benches where all these beautiful items were made had to be designers, joiners, machinists, engineers, and businessmen, as well as metalsmiths and artists. Well, perhaps they didn’t have to be artists, but to succeed one did need to possess an eye for symmetry and detail. The reason for this was because the raw materials used in the fabrication process were so low-tech and crude, I wrote that –

back then, framebuilders were also metalsmiths, artisans if you will, not simply joiners and assemblers as we have become these days. Though working with the torch was generally left to the most senior members of a framebuilding concern’s staff, the preparation and reworking of all the little fittings was carried out at the workbench of those being groomed to, one day, many years later, become competent framebuilders as well. This is how we cut our teeth in those days. The quality of even the finest components was so poor that, unless one developed the skills to reshape, file, fit, re-fit, and thin – unless one had the hands and eyes to discern the right clearance and proper aesthetics – no piece would get far enough along in the building process for the masters to be able to perform their magic.

I reckon it took me a decade and at least 1,000 frames to feel comfortable with my nascent skills. The processes never came easy for me and I attribute this to my lack of technical training going in. Regardless of my enthusiasm for the work and my desire to make beautiful bicycles like the very ones that turned my head when I was younger, the craft part of the equation was a true learning curve.

Funny this, but by the very time I felt like I was almost in control of my own metalworking abilities, the lights started to flicker. My introduction to the trade coincided with its moving away from traditional tasks and a need for folks with a flair for the artistic to an E-ZPass Lane, there’s-no-stopping-us-now path to what would replace all that came before it. The way I remember explaining all of this was by using these eleven words –

I got dragged kicking and screaming into the Investment Cast era.

I spent almost ten years getting myself well-trained for what would follow, and an industrial process would soon yield my developing skills redundant after a point. I recall fighting the urge to cross over to the dark side. I argued against the technology as if it cheated the public out of some humanity that was part of the bicycle making process. I judged effbuilders who embraced it as sell-outs. But the biggest hurt I was feeling was one of possibly being left behind. I always wanted to make the next frame rather than remake the previous one, and never in my career did I catch the homage bug. I am not wired to love what once was when I am living in real time and seeing so much possibility regarding what could follow it. For reasons now lost to the past, especially to its romantic side, I feared the day I would be taking a piece of metal from a carton, sent to me from the very foundry that cast it, and use it without any personal attention needed. The parts that we all labored over to make technically correct for the framebuilding process as well as beautiful for anyone who might see it – there now would be far less to differentiate my work from anyone else choosing the same parts from the same source.

Again, I wrote that –

Ours is a plug-in, cookie cutter-like industry now. Save for the tubeset, every single component for the framebuilder is now available in the antiseptic-like, model room quality that comes from the wax molds of the foundries of a few different firms. It is a Rollerball society for framebuilding. We have the Big Three Corporations: Hitachi, Microfusione Italiana, and Everest. We have the dozen or so companies whose blueprints they will execute. The suits make most of the choices. Yes, the process includes a wide enough offering so that it seems selection is actually possible; so that your components don’t exactly look like his components; so your details don’t exactly look like his details. They make their pieces and they sell their pieces, each particular one exactly the same as the one before it. It is offered. It is bought. It is brazed. No labor necessary. Inhale crude; exhale cast.

This is how I spent most of the 1980s – lamenting the fact that I was finally a working framebuilder with a brand and a clientele – and the very trade in which I expected to live out my days went and got its own self homogenized atmo. Even a well-intentioned effort on my part to align with one of the casting houses, while maybe an outside-the-box moment for me in that time, fell short. In 1982 I had designed a set of cast lugs for Takahashi Press Company, Ltd based on the very (very) short point Nervex Ref. 32 parts I had been using since 1975 – and technical limitations in the manufacturing process made the finished parts even harder to look at than I could ever imagine. In time, components made with a modicum of style began to replace the first several iterations that had once offended me.  By 1985, I found resources for beautifully cast versions not commonly offered in North America, and forged (sic) ahead. I became fully entrenched in the very technology I once considered the Anti-Christ of this craft. I have been a Varsity Team player on the Dark Side of Framebuilding since the mid ’80s and I haven’t looked back once or regretted a single step.

By 1992, I designed a second set of lugs, this time for Bridgestone Cycle Co Ltd. These later became the go-to material on the original production runs of Rivendell Bicycle Works, a brand that would supersede the Japanese firm in the hearts of many of its followers. And in 2001 I started work on designing and manufacturing RS branded cast parts for what was now (or was then…) an already shrinking pool of resources owing to the industry’s going the opposite direction, leaving behind such conventions as steel tubing, brazing, lugs, and even hand-made forks. Doh.

Now that it’s 2012 I can’t imagine wanting to make a market based on old and dated materials and methods. Sure, every so often I’ll do a period piece, but it’s not part of my daily routine. Perhaps I do it because I want to ensure that my metalworking skills can still be summoned up. But I hardly think the best bicycles can be made with parts that have been sitting in boxes since De Gaulle presided over France – and that’s according to my opinion.

Imitation art is a phrase I use to describe a finished piece whose aesthetics and parameters mimic an original, though it’s manufactured by someone other than the artist and often using different and more efficient methods. What once scared me about the very technology that would allow this to happen now intrigues beyond words.  I never sensed it in real time, but folks who designed parts that I used up until the very day I had my own iterations enabled my career to be realized. Making an original is like having a dream; taking an original and finding ways for others have it and its possibilities – this is like sharing that dream. 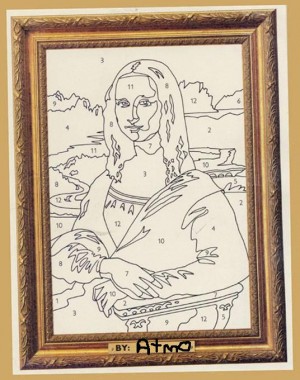 « No Fiddler On This Roof
Shows No Effort At All »