So, in 1994 I read an article in the New York Times about Paul Laubin and his oboes. The story was so compelling that I clipped it, come back to it often, and have used it for inspiration ever since. It centered around his small eponymous second generation business and the demand for his world class instruments. It also introduced the reader to Sherry Sylar, a musician with the New York Philharmonic, who was there to pick up an oboe she ordered eleven years earlier.I have saved news-clippings since I was a school boy because they ground me and enable forward momentum simultaneously. They energize me. When I see someone doing special work, I want to know more, and try to use the experience to enrich my own path.Several years later, I contacted Mr. Laubin and told him about this, and he was kind enough to write back. Alas, he’s also a cycling enthusiast and was familiar with my small corner of the trade. His inscription to me says, To Richard Sachs, Master frame builder, with hopes for continued success.
. 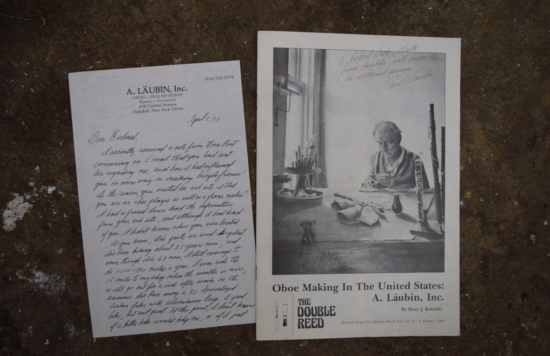 « Little Jewels All In A Row
The Playing Card Shark Tank »