I am not sure I know the meaning of the word, perseverance. My career – actually I should say my life because what I do is so intertwined with who I am – is not where it is because I persevered as much as it is because I let fate happen. On the left hand side of the time-line that includes all the bicycle stuff, I experienced a series of obstacles, closed doors, and rejections. Not a single one left a scar; they simply happened. Period.

When I was at The Peddie School we were expected to apply to four (that’s four, as in no less, and definitely no more…) colleges. I guess the administration assumed that if you matriculated well and took advantage of all the institution offered, narrowing choices to four colleges should be simple. I sent apps to Bennington, Marlboro, Bard, and Antioch. After being rejected at each of these (I’d wager the first time in a long time that a Peddie boy had to reapply), apps were mailed to Goddard and Franconia. I was accepted at both colleges. I selected Goddard, probably because the photos of students in the catalogs made it look like they were having more fun, had access to better drugs, and listened to cooler music. Since I wanted to write, these things made my radar.

Goddard was not able to receive me for a traditional September arrival so my life as a college student was scheduled to begin in April of the following year. With a full summer and then some to waste, I got a job working in Manhattan in, of all places, the basement of the Empire State Building. During my tenure, I noticed an ad in the Village Voice for a bicycle mechanics position in Vermont, some six hours north. Having already let bicycles invade my private space about two years prior, I considered myself an expert. After all, I did subscribe to the bicycle magazines of the day, one even being from as far away as Australia, and I was by that time a zealot for the best equipment available (read: Campagnolo Nuovo Record), and I already had ordered and received my first of what would be three W.B. Hurlow frames. I was a bike geek atmo. The job in Vermont had my name on it, and all I had to do was take a bus north, walk in, and my routine would be completely scripted until April when I would enter Goddard. Though no internet existed back in 1971, my life and what happened next in it is well cached: I did not get the job.

That rejection was a bit humiliating. But within a day I had devised a scheme to redeem myself. If fixing bicycles was cool, then making bicycles had to be cool squared. I wrote to several firms whose names appeared in a popular British cycling magazine (all were businesses that mentioned that they made frames on the premises) and stated my case. For the opportunity granted to me to work there, observe, maybe be shown a few things about the process, I offered myself as free labor. Dozens of letters sent. Three replies received. And only one company agreed to let me come and take up space. The letter of rejection below is from the firm that made Bob Jackson frames. I have another similar letter from Ellis Briggs, a shop where Doug Fattic would land four or five years later. I ended up at Witcomb Lightweight Cycles in Deptford, London SE. Yeah – I have that letter too.

There was no plan. There were no goals. I ended up where I ended up as a result of fate. I have been known to say that a smarter person might have realized more in real time and would have taken a proactive role in shaping his destiny. But it took me at least 35 years to say those words. I have referred to all this as being like a balloon in the air, going in whatever direction the wind blows. And I have described my path, business-wise, as one that I took and never veered from simply because I was too stupid to see the warning signs suggesting there was no future in it. Again, I said these (types of) things after about 35 years at the bench. The hindsight thing is pretty cool atmo.

Somehow I made it here without knowing I had a say in the matter. The industry stuff, the racing, all the frames and the clients who ordered them, and the independence – especially the independence – these are rewards for not knowing better. It wasn’t perseverance that delivered me here. It was an inherent trust that the universe takes care of itself. No matter how many obstacles, closed doors, or rejections I encountered, there were always two more roads to travel going in another direction. And both of them were the correct choice.

My spot at Goddard College most likely went to someone who wanted it as badly as I did at the time.  But fate took me from Manhattan to Vermont, then to London, and then to New England. I didn’t set out to become a framebuilder. I ended up as one. 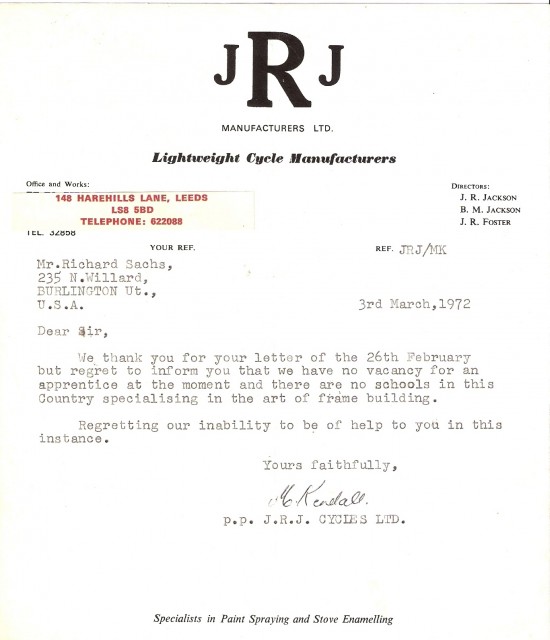